Ah, the beauty of ambiguous language. The title could be wondering if (a) Kim Jong-il's health is deteriorating, (b) the Dear Leader may be heading for a lower latitude, (c) or KJI will be joining OBL in the ninth circle of hell.

The answer is (b), though (a) and (c) remain future possibilities.


ROK President Lee Myungbak has said he will invite North Korean strongman Kim Jong-il to a summit if the Dear Leader pledges to give up atomic weapons.


Lee said he would extend an invitation to North Korean leader Kim Jong Il to a security meeting next March if the communist government agrees to the condition. The South Korean president will host the summit next year as part of a global initiative championed by President Barack Obama to secure nuclear stockpiles. ...

The North Korean leader told visiting former U.S. President Jimmy Carter last month that he is ready to meet Lee any time and over any issue. The South has resisted talks with North Korea until Kim’s regime shows a “responsible attitude” toward attacks last year that killed 50 South Koreans.

My goodness, that's a lot of ifs. If he gives up nukes... If he's willing to travel to a place where he might encounter angry opposition and he's not in total control of his security... If he's still alive next March (and I think he will be)...

Frankly, I doubt KJI will actually end up coming to Seoul, but I think Pyongyang will make like he is planning to go up until the very end. 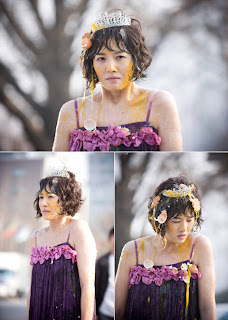 Can you imagine Kim Jong-il being pelted with eggs? His handlers are probably horrified at the prospect. And after what's gone on in Libya, they're horrified by the thought of giving up nukes as well. Let's not also forget that Kim Jong-il getting a whiff of free-wheeling capitalism is not the best way to get him to reform.

And then, if KJI does leave the country, there's always the chance of a brown parade back home.