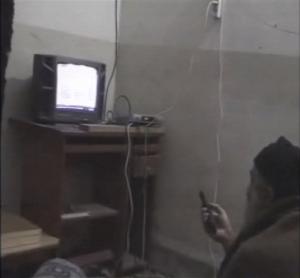 At least, that's what's being revealed as some of Osama's Abbottabad booty is released for public consumption:


From a shabby, makeshift office, he ran a global terrorist empire. The world's most wanted man watched newscasts of himself from a tiny television perched atop a rickety old desk cluttered with wires.

For years, the world only saw the 54-year-old Osama bin Laden in the rare propaganda videos that trickled out, the ones portraying him as a charismatic religious figure unfazed by being the target of a worldwide manhunt.

On Saturday, the U.S. released a handful of videos, selected to show bin Laden in a much more candid, unflattering light. In the short clips, bin Laden appears hunched and tired, seated on the floor, watching television wrapped in a wool blanket and wearing a knit cap. Outtakes of his propaganda tapes show that they were heavily scripted affairs. He dyed and trimmed his beard for the cameras, then shot and reshot his remarks until the timing and lighting were just right.

I wonder if he shared cinematography tips with the Dear Leader.

Anyway, some of the newer videos show him watching stuff that should provide conclusive evidence to all but the most die-hard deathers that Osama bin Laden died recently and not five or ten years ago. (Seriously, what benefit could Bush/Cheney possibly have had in withholding that kind of information from the public as they faced a tough re-election campaign and Dubya saw his approval numbers plummet? That kind of conspiracy theory makes as much sense as an eighteen-year-old ultra-pregnant White woman in 1961 traveling halfway around the world to give birth to a child in a rundown Kenyan hospital in front of the wife she didn't know her bigamist new husband already had.)

In fact, Al Qaeda themselves have confirmed his demise. And what possible benefit would they have in making that up? Losing the charismatic OBL has got to hurt in the fundraising side of the business.

Anyway, we should expect more interesting tidbits as they go through the treasure trove of media they captured and release what they can to the public.

Their biggest problem so far? All the DVDs are Region 5. 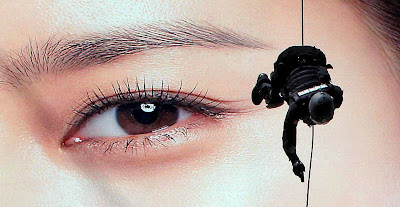 I am waiting to see if they discover planned or considered attacks on South Korea or neighboring Japan. A lot of people forget this, but on the Saturday before the 9/11 attacks back in 2001, the Joongang Daily carried a story about the US being very concerned about indicators they got pointing to an attack on US interests in South Korea and/or Japan. The oh-so-clever headline writer (maybe the guy who wrote this) entitled the piece “In Case Anyone Cares, It’s Something About Terrorism.”

Well, the following Tuesday, the two main towers of the World Trade Center were hit in New York City, one of two cities attacked that day. Since then, I have always wondered if what was really going on was that Korea and Japan were code for either the two towers or for New York City and Washington DC.

(The ill timing of the jokester headline writer's glib headline was unfortunate; I guess the message there is don't make up stupid headlines for serious news just because you're too much of a duckweed to realize it's serious.)

Anyway, both Korea and Japan have been lulled into a sense of security, enough that it might not be that hard to launch a bombing attack. I won’t say anymore than this, but there are vulnerable buildings that, post-Oklahoma City, should not have been built how and where they were.

I'd be curious whether al Qaeda ever picked up on that and thought the heavily Christian ally of the United States would be a good target.