In honor of Monster Island hitting the 50k mark, guess who has replaced Shin Saimdang (신사임당/申師任堂, or Sin Saimdang) to go on the new 50,000-won bill?
Yeah, but they're probably going to revert back to their original plan for the bill to be released in June (since little Kushibo was so cute, people would be hoarding their money instead of spending it):
Actually, this rendering of the much revered Shin Saimdang looks a bit off. The stamp below is based on the classic portrait of this ideal Confucian wife and mother, often called Ŏjin Ŏmŏni (어진 어머니, or "wise mother"). Frankly, I think would look better: more attractive without being too MILFy. 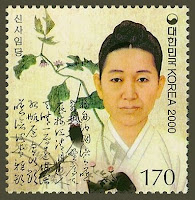 For past discussions on Korea's newly re-designed 1000-won and 5000-won bills, go here and here.
[The above silliness was inspired by Stay Puff, who has some good ideas on the new bill as well, in addition to some inspiration for who to put on the 100,000-won bill, if they ever make one (they were going to but then changed their mind).]
UPDATE:
Mark ("outpost of tranny") has my favorite so far. Well, actually, my favorite so far would be the actual omanwon bill that can buy me a dozen real cups of Joe at Coffee Bean & Tea Leaf.