Japanese relatives lose lawsuit to disenshrine loved ones at Yasukuni

The Yasukuni Shrine is a very touchy issue in Northeast Asia. Former Prime Minister Junichiro Koizumi's annual visits to the site, which also enshrines fourteen "class-A war criminals" who were largely responsible for Japan's war of aggression, led to a souring of relations with Mainland China and South Korea, where citizens launched angry protests and even called for boycotts of Japanese goods.
But it's easy to forget amongst all that hubbub that there are many Japanese opposed to the workings of the shrine, not just the visits by Japanese leadership (which some say violates the separation of church and state while others say, like the Koreans and Chinese, that it is part of the whitewashing of Japan's past aggression), but also the enshrinements themselves.
Among them are the relatives of eleven servicemen and civilian employees of Imperial Japanese forces, who said the Yasukuni shrinekeepers had "infringed on their human rights to respect their loved ones and cherish memories of them by unilaterally enshrining them collectively without the relatives' consent." Each of the nine plaintiffs was seeking ¥1 million (roughly US$10,000). 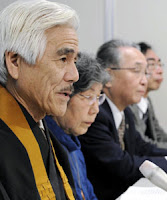 [left: Ryuken Sugawara, leader of the plaintiffs, speaking to reporters in Osaka]
The Osaka District Court shot down their lawsuit, saying such rights are out of the range of legal protection. The lawsuit had also targeted the Japanese government, whom the plaintiffs said was complicit because it "has helped Yasukuni Shrine over many years by providing information on the war dead."
This is no small issue. A large number of Koreans and Taiwanese, who were Japanese Imperial subjects during the war, are also enshrined there, much to their relatives' dismay (although I'm fairly certain at least a few of the Korean and Taiwanese dead would have been proud to be enshrined there, in line with how the educational system had inculcated some colonial subjects).
Christians and others in Japan who don't follow the Shinto faith also are offended by the enshrinements. That brings me to what I feel is the best parallel I can think of in the United States, where the Mormon Church "baptizes" Jews who were killed in the Holocaust, effectively Mormonizing them posthumously.
Jewish leaders have generally been quite offended by this, and the LDS (Latter-Day Saints, as the Mormons are called) has said after negotiations that they would stop, but it seems they have backtracked on that promise. Extending the parallel even further, Mormon media reprints stories of Jewish people who have come to peacefully accept what the LDS is doing.
on February 27, 2009