Gary Locke to be Commerce Secretary (unless something else goes wrong)

Former Washington State Governor Gary Locke (駱家輝), the nation's first Chinese-American governor, has been tapped to be Secretary of Commerce, a position that remains unfilled after New Mexico governor Bill Richardson (my pick for president) dropped out due to an investigation into possible corruption in his office and US Senator from New Hamphire, Republican Judd Gregg withdrew his nomination for philosophical differences over President Obama's stimulus packages.
Former Governor Locke is a third-generation Chinese-American who had lived in public housing and worked part-time jobs and used financial aid to get into and pay for his education at Yale University, a somewhat classic tale of immigrants-make-good.
He served for eleven years in the Washington House of Representatives and then eight years as governor of Washington. Locke was also the co-chair of Hillary Clinton's election campaign, so it's yet another sign that the different factions of the Democratic Party are making nice with each other. 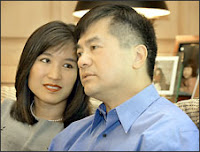 Anyone who eventually becomes Secretary of Commerce is going to have to deal with China, and while there is no certainly indication that Locke is any less loyal an American than the most loyal of Americans, his familial and even cultural connection with China (his wife Mona Lee is the daughter of southern Chinese immigrants) may help reduce tensions with a Beijing that is distrustful not just of Washington's intentions, but with how the United States tends to view China as a latter-day yellow horde.
At the very least, with the likes of Mrs Clinton and Mr Locke (and Mr Colin Powell and Ms Condaleeza Rice before them), the idea that the White House is a Good Ole Boy's Club is an outmoded notion.
UPDATE:
Right-wing pundit Michelle Malkin claims that Locke is dirty, in part because disgraced Democratic fundraiser John Huang helped raise some $30,000 for him back in the late 1990s. I'm glad it's Michelle Malkin revealing this information and not some White pundit journalist digging up these nasty details. This way there is at least one Asian-American that the country can trust.
on February 24, 2009