It's all over the Wide World Inter Tube by now, this picture of Miley Cyrus and her friends doing the "Chink-eye" bit. Hey, Miley and fans, no matter how much you keep doing that, it won't make your SAT scores go up one iota. 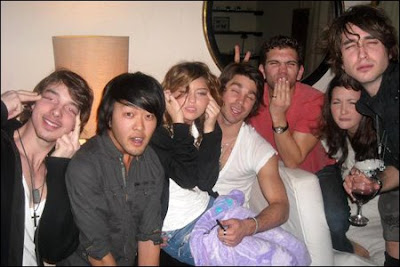 [above: Is she just being Miley?]
I was hoping that someone would issue a press release saying this was actually a still shot from a new show being hosted by the guy second from the left, called "Wow, Some White People Can Really Be Douchebags At Times." Isn't that what the expression on his face is saying? His inscrutable Oriental face?

But let's not forget, Miley Cyrus is only sixteen, despite having posed for racy photos (ooh... that was an inadvertent pun... must change title from "Herro, I am Mirey Cylus"). Sixteen-year-olds do some pretty dumb things, especially when they're trying to impress their equally stupid friends (this commenter at Gawker sort of sums it up). That's why we give them driver's licenses and the keys to Mom & Dad's oversized family vehicle.
In other words, if she's still doing this after her first year of college when she's taken all those American Studies courses and she finally realizes how frickin' offensive it is to make fun of minorities who have been oppressed since setting foot on American soil or having the US take over their land, then we can start talking about what a racist peckerwood* she is (hehe, like she's going to college; or could get into one). For now, I'm willing to cut her some slack. Now if her dad had done this, on the other hand, he'd deserve to have his face be all achy breaky**.
I predict this latest Miley hoopla will be followed by an apology that includes an appeal to her fans that she was ignorant and did not mean to hurt anyone, and it will all blow over. That is, unless this picture is followed by audio where she really is heard saying, "Herro, my name is Mirey Cylus. Nyang nyang nyang nyang."
Seriously, though. Which one is Miley? All the White people in that picture look alike.
* The fact that "pecker" and "wood," two slang terms for a penis and an erection, respectively, are combined to mean "White trash" is one of the many ways in which English is a baffling language to ESL students.
** This comment is simply literary hyperbole. In no way does Kushibo endorse violence against anybody, even those who make racist caricatures or produce Country-Western pop-slop that won't get out of your head. Make it stop! Make it stop!
on February 05, 2009