Y'know, one of the things that is frustrating for many people from South Korea is to explain to them that South Korea is the democratic one, and it's North Korea that is threatening its neighbors and starving its people.
So what does the Washington Post use as a photo to go along with its story about North Korea saying it's preparing to launch a satellite that many believe is actually a test of a long-range missile? Little kids in South Korea playing near missiles (below with original caption). 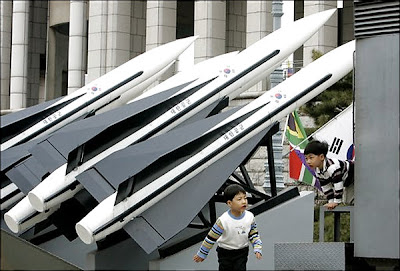 South Korea children play beside South Korea's Hawk missiles at Korea War Memorial Museum in Seoul, South Korea, Tuesday, Feb. 24, 2009. North Korea says it is in full-fledged preparations to shoot a satellite into orbit, its clearest reference yet to a launch that neighbors and the U.S. suspect will be an illicit test of a long-range missile. (AP Photo/Ahn Young-joon)
Nice. Is it any wonder that so many Americans still think M*A*S*H represents real life in Korea nowadays?
on February 28, 2009