PBS's Newshour had a good overview of two major news stories this week: the ascension of Kim Jong-il's third son, Kim Jong-un (kim chŏng-ŭn) and the trial of reporters Laura Ling and Euna Lee. National security expert Victor Cha of the Center for Strategic and International Studies gives his take on the first story, while Lucie Morillon of Reporters Without Borders does the same with the second one.
Victor Cha on the ascension:

A lot of the information is very anecdotal. There is not a lot of good on-the-ground intelligence with regard to the Kim family.

The oldest son, Kim Jong Nam, was probably most well-known for his botched attempt to try to enter Japan on a fake passport and was detained at Narita airport. His reason for going to Japan, he said at the time, was he wanted to take his family to Disney World.

Frankly, I'd be more impressed by his analysis if he knew that it's Tokyo Disneyland and not Tokyo Disney World, but that's probably a minor point. Still, he (and much of the rest of the world that seems to want KJI to die as quickly as possible) doesn't seem to understand that weight loss in those who suffered strokes months ago but are now walking are not a sign of impending death:

Kim Jong Il's health itself appears to be in quite bad condition. As you had said, he suffered a stroke last year, and people thought that he had recovered, but when there were pictures of him at the Supreme People's Assembly, which is the major legislative gathering in North Korea, in April, he clearly looked like a man that was in very bad health.

Nonsense. If you have survived a stroke (and KJI apparently has), then your risk of stroke is from the next one, not the previous one. The Dear Leader is no doubt on a whole bunch of medicines designed to keep the blood pumped by his cold, black heart as close to the perfect viscosity as possible to keep him from having another one. KJI, in fact, may be around for a long, long time.
With the Ling & Laura trial, it was clear that the RWB representative was not reading from any conservative talking points:

The circumstances of their arrest are still pretty murky. We don't know exactly if they were picked up on the Chinese side or the North Korean side, but, in any case, if they made a mistake, if they crossed, they didn't do it on purpose for some espionage reasons or whatever. They probably did it on a journalistic purpose.

And the border between the two countries is a river, so it's hard to tell exactly where it is.

Just what the hell does that mean? It's a freakin' river! When you hit water, you're there. Is she suggesting there are multiple rivers in the area and they were crossing each one without knowing which one was no longer China on both banks? Is she saying that because it was a river there was no signage indicating a border? (This is not true.)
Anyway, the PBS piece is a good overview. And it made Kushibo yell "Whiskey Tango Fu¢k" while jogging. And so did the SUV driver who almost ran me down in the BofA parking lot. 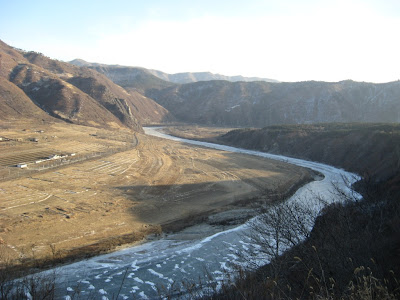 [above: Picture Puzzler #231. This picture includes a river that forms an international border. Can you find it? Look carefully. Turn your computer sideways to get a different perspective. Yep! There it is!]