A constitutional crisis in China 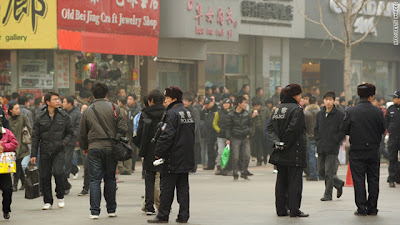 Monster Island favorite Barbara Demick of the Los Angeles Times is reporting from Beijing on a subtle form of protest being employed in the People's Republic of China:


Whoever is sending out the mysterious tweets calling for regular Sunday afternoon "strolls" around China has come up with a highly effective psychological operation against the government, sending a paranoid security apparatus chasing at shadows.

The possibility that somebody might heed the coy calls to protest led Chinese security to virtually shut down some of the most heavily trafficked sites in the country: a McDonald's on the popular Wangfujing pedestrian mall in downtown Beijing and Shanghai's People's Park.

Wangfujing on Sunday had the feel of a Cold War spy novel, with shifty-eyed plain-clothed agents scanning the crowd and dozens of foreign reporters doing their best to remain incognito in fading sweatshirts and wool hats.

After roughing up one journalist and injuring several others, police cleared the area using a novel method: They deployed a battalion of street-cleaning trucks, preventing anybody from leaving or entering for more than an hour and causing curious pedestrians to wonder why authorities were cleaning the street on a sunny weekend afternoon.

The crackdown has only emboldened the organizers of the protests, who remain anonymous and appear to be operating from outside China. For this weekend, they've named 55 locations in 41 cities, all popular gathering places, such as a Starbucks in Guangzhou and a spot in front of the statue of Mao Tse-tung in Chengdu.

Hmm... I wonder if any of these outside-China organizers are here in Honolulu.

Anyway, I like this story in part because (a) it's nice to see the Chinese government get nervous that they are not satisfying the wants, needs, and desires of the people, as this is one of the few checks the people of the People's Republic have on their government, and (b) it's not often you get to use that other meaning of constitutional (i.e., a walk or stroll to maintain or restore one's health) when referring to politics.


It's also interesting that a number of the sites for these protests with a hint of jasmine are using symbols of Western corporatism (e.g., McDonald's, and I think Starbucks and KFC) as gathering points. Interesting, but not surprising given that these become meet-up landmarks in a given locale (not unlike South Korea).

It's important to remember that despite the peaceful nature of these protests, Beijing is taking it grimly seriously. Reporting from the area has been formally prohibited, and as the LAT piece mentions, they're targeting and tracking the foreign press (and perhaps bloggers as well). They're also using good old-fashioned physical obstructions to thwart would-be protesters.