And the Pat Robertson Disaster Prevention Award goes to... 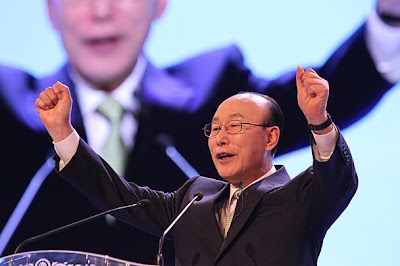 ... Pastor David Yonggi Cho of Yoido Full Gospel Church for wondering aloud if the Tohoku earthquake and ensuing tsunami and nuclear disaster were not a warning from God:


In an interview the newspaper, Cho responded to a request for comments on Japan’s difficulties following its largest earthquake in recorded history by saying, “Japan sees a lot of earthquakes, and I think it is regrettable that there has been such an enormous loss of property and life due to the earthquake.” He went on to say, “Because the Japanese people shun God in terms of their faith and follow idol worship, atheism, and materialism, it makes me wonder if this was not God’s warning to them.”

“I hope that this catastrophe can be turned into a blessing and they take this opportunity to return to the Lord,” he added.

And our runner-up, who will step in and perform Parson Cho's duties if he is unable to serve out his term, is no other than Fox News commentator Glenn Beck:


On his first day back from vacation, Glenn Beck addressed the earthquake in Japan, and said he thinks that it could be a "message [is] being sent" by God.

Speaking on his radio show Monday, Beck said, "I'm not saying God is, you know, causing earthquakes," before quickly adding, "I'm not not saying that either."

He then said that whatever one called God, "there's a message being sent. And that is, 'Hey, you know that stuff we're doing? Not really working out real well. Maybe we should stop doing some of it.' I'm just saying."

No doubt God is listening right now, and well, let's just say I wouldn't stand to close to either of these mooks if I was you. I'm just saying.

The Pat Robertson Award is the namesake of televangelist and former Republican presidential candidate Pat Robertson, who in the aftermath of Hurricane Katrina in 2005 said that New Orleans was struck because God was punishing Americans for their ungodliness.

He managed to win his own award last year for saying something similar after the earthquake that struck Haiti and killed a quarter million people:


Robertson, the host of the "700 Club," blamed the tragedy on something that "happened a long time ago in Haiti, and people might not want to talk about it."

The Haitians "were under the heel of the French. You know, Napoleon III and whatever," Robertson said on his broadcast Wednesday. "And they got together and swore a pact to the devil. They said, 'We will serve you if you will get us free from the French.' True story. And so, the devil said, 'OK, it's a deal.' "

The "700 Club," by the way, gets its name from the combined IQ of its regular viewers. True story.