American teacher confirmed among the dead in Japan 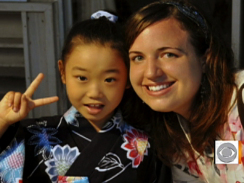 This news is just one of many tragic tales.

UPDATE:
In a gracious act, Taylor Anderson's family is donating her belongings to victims of the same earthquake and tsunami that took their daughter. Their emotional roller coaster is also heartbreaking:


Taylor Anderson is the first-known American victim of the Japan earthquake and tsunami. The 24-year-old taught English in the seaside town of Ishinomaki.

Four days after the tsunami struck, Anderson's parents were told their daughter had been found alive. Later that day, however, the Andersons were told by the organization Taylor worked for, JET, the Japan Exchange Teaching program, that an error had been made and Taylor's whereabouts were unknown. Taylor's parents were notified of her death on Monday by the U.S. Embassy in Japan.

Officials there say she spent her final moments making sure her young students were safe. But ultimately, she ran out of time to save herself. Her body was found not far from her school.

In this CBS News video, her family speaks out about the death.