"Homefront" scenario fuels negative views of Koreans and other Asians? 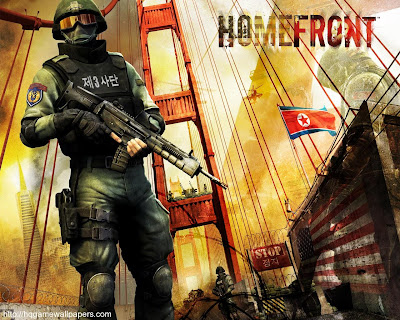 Writing in the Minneapolis Star-Tribune, slam poet and "relatively dedicated gamer" (read: unemployed basement dweller) Bao Phi worries that the new first-person shooter video game "Homefront," which depicts an invasion of the United States by a unified Korea in 2027, à la Red Dawn, will cause Americans to get a skewed view of Koreans as violent, inhuman, anti-American, and really tall.

I have just two things to say to Mr Phi and his alarmism over the prospect of a new "yellow peril."

First, anything that erodes the image of Asian men as nothing but wimpy computer geeks and study nerds with spaghetti arms and physiques like that of an eight-year-old girl suffering from anorexic bulimia is probably a good thing.

Second, there is no way even "Homefront" can topple the two dominant stereotypes of Koreans as liquor store owners and massage parlor hos.