While the Mazda6 is being recalled for spider infestation (yep, you read that right), praise is being lavished on the Hyundai Elantra, recently released in an upgraded version that is turning heads with the "fluidic sculpture" design.


Shopping for a compact car is typically an exercise for your left brain. This hemisphere of your mind where logic resides delights in how rational and economical cars in this segment can be.

Meanwhile, the more visually oriented right side of your brain (that also dabbles with emotion) hears "compact car" and goes numb with boredom and starts replaying episodes of "The Cosby Show." After all, what's more visually stimulating than one of Heathcliff's sweaters?

The most likely source for neurological rapture in your left brain will be the Elantra's class-leading fuel economy of 29 miles per gallon in the city and 40 mpg on the highway. With the price of gas rising faster than Moammar Kadafi can update his resume, this efficiency may well push the car to the forefront of consumers' shopping lists in the coming months.

It's not all applause and admiration, though. There are some complaints that the Elantra still behaves a bit like an economy car with noise and power steering. But overall, it is increasingly being regarded as the first car to see for shoppers in that demographic. 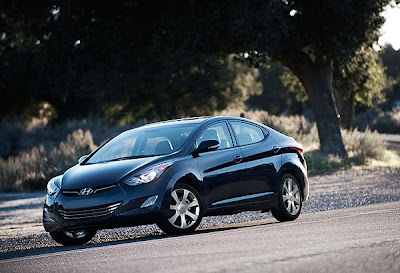 The second to the last time I was on the Mainland I rented a Hyundai Elantra, pre-redesign. It was zippy and enjoyable to drive, something that surprised me quite a bit, and by all accounts this is better in most ways, so if it's something I would seriously consider if I were looking for something in that model and price range. Maybe even if I weren't.