Once more, with feeling? 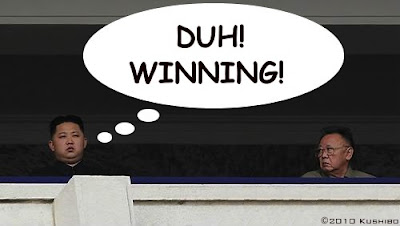 It looks like another semi-annual meeting of Pyongyang's rubber-stamp legislature will meet next month. Western media is already speculating that this time will be the time that Kim Jong-un gets promoted to Daddy's Heir:


The younger Kim, thought to be in his late 20s, was made a four-star general and vice-chairman of the Central Military Commission in September, and appeared for the first time alongside his father at official functions.

The next step would be to make him vice-chairman of the National Defence Commission, the country's most powerful organ, led by his father. The post has been held by the current leader's brother-in-law since last year.

I'm skeptical, of course, but Kim Jong-un getting a new title or two would be as clear a sign as any that there are powerful people in place trying to make sure KJU takes the reins of power when Kim Jong-il dies.

But I'm not disputing that. Of course the Dear Leader is trying to solidify his legacy, while others in his inner circle are trying to guarantee their seat on the gravy train. Rather, I simply don't think that giving L'il L'il Kim all these vice titles are any indication of wide acceptance of the dangerously inexperienced Kim Jong-un's ascension. When Daddy's gone, those titles may mean nothing to factions that don't want to see a sequel to Godfather II.

And what about that post held by KJU's uncle (KJI's brother-in-law)? Mr Chang Songtaek's own hold on power is what bolsters nephew Kim Jong-un. As they move things around that to shore up this but expose that, methinks the Kim-Chang alliance will soon realize they can't win this game of Jenga.