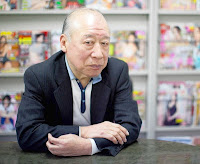 First there was Too Young To Die, and now this:


For years, a Tokyo grandfather kept a dirty little secret from his family. Longtime travel agent Shigeo Tokuda, who resembles countless older men who ride the Tokyo subway each day, admitted to his wife and daughter that he sometimes performed cameos in small-budget films.

The films play upon well-documented Japanese male fantasies. In each, Tokuda plays a gray-haired master of sex who teaches his ways to an assortment of young nurses and secretaries. Whips and sex aides often factor in the plotlines.

Email ThisBlogThis!Share to TwitterShare to FacebookShare to Pinterest
Labels: pornification