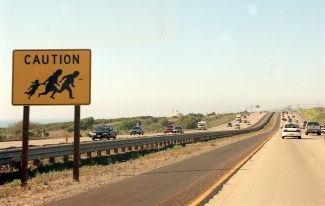 There are three things you notice when you drive I-5 between San Diego and Orange County: the beautiful coastal scenery, the signs warning of illegal aliens crossing the freeway as they flee ICE, and the nuclear power plant that is shaped like two perky boobs pointing upward. Hmm... make that four things.

That plant is San Onofre. 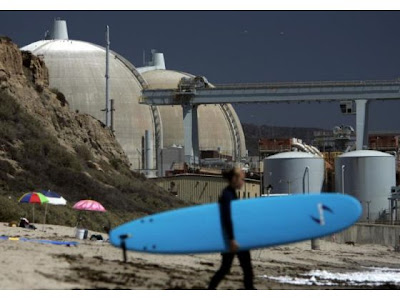 When I was a kid, I took a tour of the plant. That adventure was a half day break from camping at San Onofre State Beach. Yup, we would boogie-board and bodysurf in the shadow of a giant nuclear facility. Good times.

Anyhoo, the problems in Miyagi Prefecture with the still on-going disaster at the Fukushima Daiichi plant there have prompted questions about how well Orange County's own neighboring nuke plant could withstand an earthquake and tsunami.

Rest assured, we are told, that we can rest assured:


As crews in Japan struggle with shutting down nuclear reactors affected by Friday's earthquake and tsunami, Southern California Edison officials say the nuclear plant in San Onofre is prepared to handle the area's seismic threats.

"A design (for a nuclear plant) is only approved by regulators if it's shown to match all the environmental challenges in that particular region," said Gil Alexander, a spokesman for Southern California Edison.

A surfer heads for the water at San Onofre State Beach in the shadow of the San Onofre Nuclear power plant in this 2006 file photo. Edison officials say San Onofre Nuclear Generating Station is built to withstand up to a 7-magnitude earthquake and a tsunami more than 25 feet high.

The 8.9-magnitude earthquake off the coast of Japan and the resulting tsunami have caused problems at six nuclear reactors there by preventing coolant from reaching the hot reactor cores, according to The Associated Press.

That leaves the question: How would San Onofre handle a large earthquake or tsunami generated closer to home?

When San Onofre was designed several decades ago, scientific studies showed that the largest tsunami likely to strike the San Onofre area would measure about 25 feet. The wall was built 30 feet high for extra protection, Alexander said.

As for earthquakes, the facility was built to survive a nearby earthquake with a magnitude 7.0, Alexander said.

During the plant's planning stages, "the best science suggested that the nearest earthquake fault, which is five miles from the plant, could produce an earthquake something less than a magnitude 7 in the plant vicinity," Alexander said.

Um, okay, then. Never mind that since they built it forty-two years ago, loads of new fault lines have been discovered in Southern California. The thing with that is that sometimes they discover them after seismic activity occurs on them. But, we are told, there is no evidence of major seismic activity there for the past 120,000 years. All those greater-than-7.0 earthquakes happen elsewhere in California.

Besides, our best calculations are that a tsunami generated there would be no higher than twenty-five feet, but just to be sure, we built a thirty-foot wall to protect it.

Actually, I think their description of the safety fallbacks are more reassuring than their reassurances that we're prepared for a pretty good sized quake that is smaller than what other parts of California gets:


"The plant is designed so that if ground-motion sensors on the plant property detect even slight movement, an automatic mechanism will shut the two reactors down," Alexander said, by inserting control rods into the reactor cores to slow and stop the nuclear process. If need be, those rods also can be lowered manually. A total shutdown would take several hours.

That actually does make me feel better (though I hope that problems with construction of the facility didn't muck up those safety features). Nuclear plants of the future need to be designed with the idea that they should be physically incapable of causing a Chernobyl or Three Mile Island, even if everything goes wrong.

San Onofre is actually not in Orange County, but just adjacent to the beachside OC community of San Clemente, home of the Western White House when OC homeboy Richard Nixon was president (earning The Big Orange the nickname "The Land of Tricky Dicky and Mickey"). It's in San Diego County, but it is isolated from the populated part of metro San Diego and even Oceanside by the vast Camp Pendleton, so it's typically considered part of the OC sphere.

My mom, who has lived in California for more than half a century, frequently tells me the San Onofre plant always worries her. If something goes seriously wrong, it could make Interstate-5 impassable for days, weeks, months, or even years. That blocks off a major escape route to Mexico for when the North Koreans eventually invade.