I am extremely terrified of Chinese people (well, just some of them). 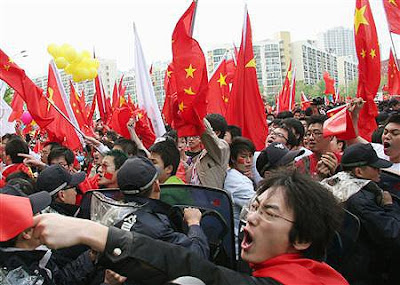 I am extremely terrified of Chinese people who come to my city and march violently in the streets and physically assault people who have the audacity to protest publicly against brutal and inhumane Chinese policy concerning Tibetans, Uighurs, North Korean refugees, and others in the People's Republic who have no voice and are frequently maimed or killed directly or indirectly by Beijing policies, especially those Chinese people in my city who are angry that South Koreans and Japanese are so impudent as to speak out against their historical "Big Brother" China because, sure, they understand that the ignorant Americans and Europeans who attacked the Olympic Torch Relay and vilify China are at heart racist against a rising China and fear an Asia dominated by Beijing, but the South Koreans and the Japanese, well they should know better, dammit!
But I'm not racist.
on February 21, 2009