I do love it when Beijing reminds us all that the Factory to the World™ is not a democracy and they don't quite share the same values of freedom of speech, freedom of assembly, freedom of etc.
Google, which has helped Beijing squelch free speech in the past, is saying that its uberpopular YouTube video-sharing website has been blocked in the People's Republic of China. Google noticed this when their traffic from China had decreased sharply by late Monday and by early Tuesday "had dropped to nearly zero." 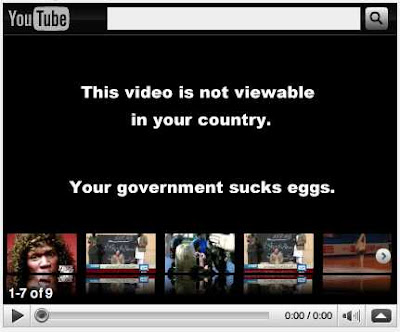 This reminds me of three years ago, when all of Blogspot (including my blog) were blocked from within China.
Google says they don't know why it's being blocked, but the New York Times speculates that it is related to a report by China's official Xinhua news agency that supporters of the Dalai Lama had "fabricated a video that appeared to show Chinese police officers brutally beating Tibetans after riots last year in Lhasa, the Tibetan capital."
The NYT speculates that this is the video. Further investigation may discover, however, that the real reason is the videos my Great Aunt May uploaded of her trip to Cancun. [shudder]
[above: Poor saps in China won't be able to view this (or this or this or this) for a while... yes, I'm making fun of you. If that makes you mad, poor saps, then write your Congressman in Beijing and blame it on the totalitarian tactics used by the CCP to control the actions and thoughts of an entire populace of 1.3 billion people. And then run like hell.]
on March 27, 2009