Useless useful idiots (Or: Tools in a trade)

In an update to this story, it appears that North Korea has moved Current TV reporters Euna Lee and Laura Ling, who were captured by North Korean guards at the border with China, to the North Korean capital, where they will act as bargaining chips for a Pyongyang regime keen on squeezing concessions out of the newly inaugurated Obama administration.
Meanwhile, their colleague Mitch Koss has left China and will likely be questioned by US authorities. The reverend who organized their trip, Chun Ki-won (전기원) is blaming their guide for leading them into North Korean territory, suggesting that he was offering them a scoop on drug deals or human trafficking.

[above: Idiots. Smug, self-satisfied idiots. It's a good chance that when these two are released they will pen one or two books on their ordeal, perhaps with a multi-million-dollar signing bonus. I want to be the first to say, "Don't buy this book." I personally will launch a boycott of said book, because I think it is wrong, wrong, wrong to let willful idiots capitalize on their stupidity that has put others at risk. Just what will the US have to do to gain their release? Given the nature of the Dear Leader's regime and the important role that the US has in aiding South Korea's (and Japan's) security, can this kind of concession possibly be a good thing? That's not even considering, as I mentioned earlier, how they have effectively plugged up an important escape route for North Korean refugees. Idiots.]
Noted North Korea watcher Andrei Lankov, with whom I've shared a beer a few times, sums it up quite nicely:

They do become bargaining chips... North Korea will send them home, but it will not happen quickly. The North Koreans want to show the world that illegally crossing their border will not be tolerated and they want to squeeze political and financial concessions from the United States.

I wrote my earlier screed before I'd even seen what Professor Lankov had to say, so it's interesting that we are of the same mind on this (although it's really not much of a head-scratcher).
As the WaPo report mentions, the English-language Joongang Daily has some details compiled from intelligence sources about just what went on:

According to South Korean intelligence, Lee and Ling walked across the Tumen River, bordering China and North Korea, at 3 a.m. last Tuesday. The narrow river is a frequent escape route for refugees and the journalists wanted a closer look at North Korea.

Sources said the journalists first wanted to stay on the Chinese side, but then their journalistic urge for a scoop led them to chance a border crossing. As their Chinese guide lingered slightly behind, Lee and Ling were stopped by a North Korean soldier.

According to the sources, the North Korean soldier at first assumed the journalists were Koreans. But their passports and other ID cards revealed them to be American citizens. The capture of the Americans was immediately reported to the North’s Defense Security Command and to the Ninth Army Corps, which is in charge of North Hamgyong Province, where the Tumen River flows.

After being questioned at the security command, Lee and Ling were reportedly taken to Pyongyang last Wednesday. Each was put in a separate vehicle so that there would be no communication between them. According to South Korean sources, the journalists are being questioned at closed-off quarters under the auspices of the command near Pyongyang. One source said, “Our intelligence tells us that since this involved border security, the command wants to physically detain the journalists.” Another source said there is also a distinct possibility that once the current round of questioning is complete, the journalists will be handed over to the National Security Defense Agency, the North’s top intelligence unit. 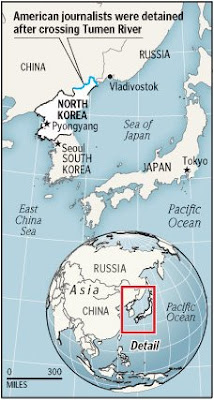 Oh, yeah, and screw you both for making me have to agree with the DPRK that you both deserve to have your asses under arrest for violating their border security. Any country would have a right to do that, even the murderous North Korean regime. Oh, that just makes me really mad.
Guess what, Ms Ling and Ms Lee, you are not bulletproof. It's doubtful that espionage charges will lead to your execution, but get used to the food at the Pyongyang Palazzo, 'cuz you may be there for a while. Of course, once you get out, you will probably tell how humanely your captors treated you, thus completing full circle your metamorphosis into propaganda tools. Useless useful idiots.
[below: Korean- and Chinese-language sign at the Tuman/Tumen River which makes up the eastern portion of the PRC-DPRK border. Translated, the warning sign reads, "Hey, you ethnics! Get the fu¢k off our g-ddam lawn!"] 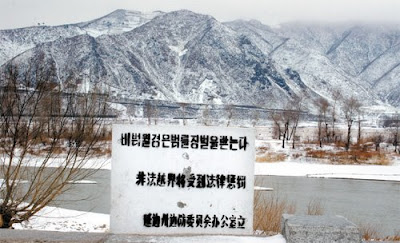