The Dear Leader has moved the missile to the launch pad (not personally, but you know what I mean), it's neighbors are pissed, and now the Japan Times says that Japanese Defense Minister Yasukazu Hamada has ordered the Self-Defense Forces (Japan's euphemistically named military) "to shoot down any part of a North Korean rocket that might fall toward Japanese territory."
The intercept order was given the go-ahead by Prime Minister Taro Aso, according to an article in the Self-Defense Forces Law allowing them to destroy beforehand a ballistic missile flying toward Japan.
Quoting Minister Hamada:

If a North Korean projectile threatened our people's safety and security by falling in our airspace, seas or land, obviously we must respond and prepare for the occasion appropriately.

Seoul, Tokyo, and Washington all believe that this is a missile test and not a satellite launch, as Pyongyang claims. US National Intelligence Director Dennis Blair has pointedly said as much.
If it is a missile launch, it would violate UN resolutions and possibly trigger sanctions (if Beijing and Moscow don't veto such things). Pyongyang says that would be the end of the Six-Party Talks aimed at dismantling North Korea's nuclear program.
Nevertheless, Japan is holding out the possibility that North Korea's leadership could be telling the truth. This, of course, makes things even more complicated. Hamada sums up the Japanese view quite nicely:

It's very annoying to have something fired over our territory. 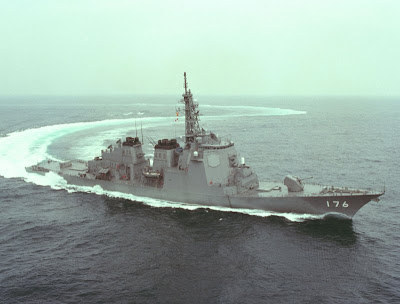 [above: The Chokai, a Kongo-class Aegis destroyer, turned around as soon as they got word from Aso to go kick some Dear Leader ass. Along with the Kongo, this ship is equipped with an antiballistic missile defense system designed to missiles. On Friday morning, both ships left Sasebo, in southern Japan and headed for the Sea of Japan (East Sea).]
on March 28, 2009