Are you ready for some futbol?

If the end of the World Baseball Classic has left you experiencing withdrawal symptoms for nationalism-infused sporting events, a bit of soccer might do the trick. Some major qualifying matches are coming up to see which "Asian" teams (Australia is apparently part of Asia) go to the 2010 South Africa World Cup.
In about four hours (Saturday, March 28, 3:30 p.m., Korea/Japan time), North Korea will play the United Arab Emirates in Pyongyang. If they're doing well, I might be willing to root for those Koreans. (Yeah, I know: fence-sitters like me are first against the wall when the revolution comes.) 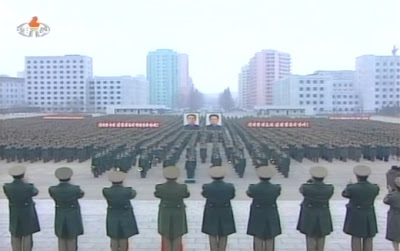 [above: North Korea plans to defeat the United Arab Emirates team with a classic 400-400-200 formation.]
But on Wednesday, April 1, at 8:00 p.m., I would definitely be rooting for South Korea over North Korea when the two go head to head in Seoul. Expect an early launch of the Dear Leader's satellite Taepodong-2 missile if the Kim Jong-il's ch'ukku boys go down to defeat to the deafening sound of "Tae~ han~ min~ guk!"
[As an aside, the North Koreans need to work on their fan branding. "Cho~ sŏn~ min~ ju~ ju~ ŭi~ in~ min~ gong~ hwa~ guk!" just doesn't roll off the tongue like "Tae~ han~ min~ guk!" And shouting "Wi~ dae~ han~ Ryŏng~ do~ ja!" would just be tacky, since the Dear Leader himself is not actually playing.]
After that, there are no matches involving South Korea until June 6, 10, and 17, when South Korea plays United Arab Emirates, Saudi Arabia, and Iran, respectively. North Korea plays Axis of Evil™ co-member Iran on June 6 (will they exchange nuclear secrets during halftime?) and Saudi Arabia on June 17.
If you'd like to root for whomever Japan is playing, cheer for Bahrain tonight at 7:23 in Saitama (Yukari, I'll bet you wish you could be there), Qatar on June 10, and Australia on June 17. Actually, I would be rooting for Japan to go to South Africa, but that's just me. 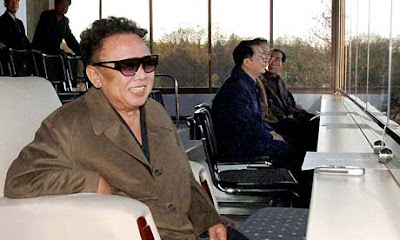 [above: Kushibo predicts that North Korea's Central News Agency will release this photograph of the Dear Leader enjoying North Korea's glorious defeat of the capitalist pigs of United Arab Emirates. I predict a DPRK win, if for no other reason than it takes cojones the size of beach balls to go to North Korea and defeat their national team in front of a crowd of tens of thousands of spectators, none of whom are rooting for you.]
on March 28, 2009