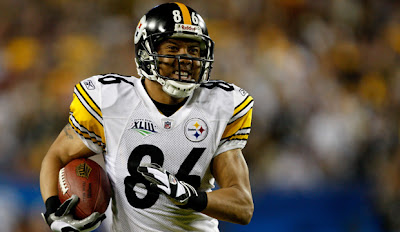 I brought this up before when it was a mere rumor, but now it looks like it's really happening:


In a move that will play well with the finances but probably not the fans, the Pittsburgh Steelers announced Wednesday that they will release All-Pro receiver Hines Ward.

"We had a conversation today with Hines Ward and informed him that we plan to release him of his contract prior to the start of the 2012 NFL calendar year," Steelers President Art Rooney II told Steelers.com. "Hines has been an integral part of our success since we drafted him in 1998, and we will forever be grateful for what he has helped us achieve.

"He has meant so much to this organization both on and off the field, and we appreciate his efforts over the past 14 years. Hines' accomplishments are numerous, and he will always be thought of as one of the all-time great Steelers. We wish him nothing but the best."

The guy is thirty-six now, which is ancient by NFL standards, so there's a question of whether he'll try to get on another team.

As I suggested before, I wouldn't mind seeing him head back to Korea and try to get "American football" to take off. If anyone is in a position to do so, it's him. Hines Ward is the most famous Korean in the NFL ever, and SoKos were steeped in Hinesanity long before there was any Linsanity. See how I did that?