In Hawaii, yesterday was the day after tomorrow 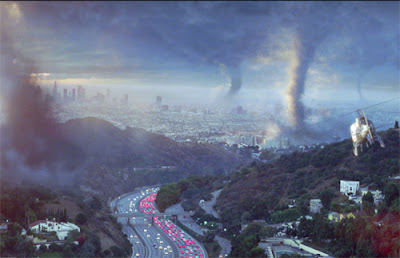 Remember the opening of The Day After Tomorrow, the documentary feature film highlighting what could happen if the Earth warmed enough to suddenly shut off the Gulf Stream that's part of the Atlantic thermohaline circulation that keeps the northern latitudes from Ice Age temperatures? Los Angeles was plagued by a sudden outburst of tornadoes, something that is unheard of in the Golden State.

Well, we in Hawaii have been having some wicked winter weather. It's been chilly and we've had some nasty thunderstorms, the cool kind that shake the ground for quite a few seconds (setting off car alarms) after lightning has struck very close to where you live. Meanwhile, the lack of sun and the excess of wind have made daytime conditions quite a bit chillier than usual.

Temperature drops into the low sixties are not that uncommon in January or February (or even March), but we've been getting three-inch hailstones and an actual tornado hitting the northeastern side of Oahu (my island). It started as a water spout (a rarity here) and went inland. 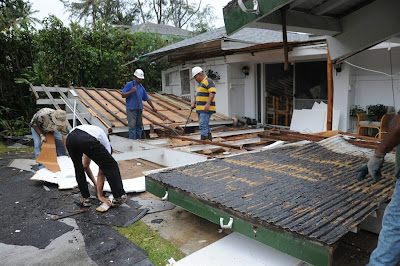 It struck Lanikai, a place where I occasionally go kayaking and biking and not far from where Hawaii-born Barack Hussein Obama often vacations. It was nothing like the horrific and deadly rash of unseasonal tornadoes that recently struck the Midwest, but it did do some damage.

If I start to see a nerdy Jake Gyllenhaal chatting up Emmy Rossum, I'm gonna be real worried.

Still, as far as Hollywood messing with Hawaii goes, I'd rather go with the Day After Tomorrow scenario than that of 2012.