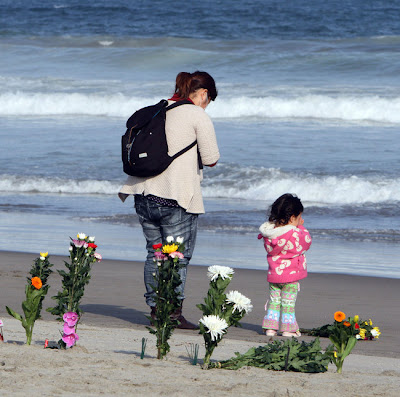 Today marks the one-year anniversary of the 9.0-magnitude Tōhoku Earthquake, the ensuing tsunami that killed many thousands, and the still ongoing nuclear disaster at Fukushima.

The tragedy has had major repercussions within Japan and elsewhere. The people of Japan — and I know this intimately from having talked with many Japanese since then — are in a funk over the future of their country as they see how many physical structures and political institutions have failed them. 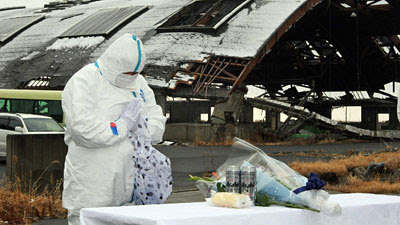 There is a portion of northern Honshū where, within a twelve-mile radius of the Fukushima Daiichi Nuclear Power Plant, no humans will be allowed to live for perhaps the next half century, if then. Yet the belongings of the former residents are still there, visited occasionally by owners who try to retrieve what they can. The land has become home on the range to feral cows no longer tended by the ranchers who'd been raising them.

Many Japanese live in fear that another massive quake will soon hit Tōkyō and bring even worse disaster — and suspect that the government that apparently hid so much embarrassing bad news about Fukushima is withholding the truth about that, too.

Meanwhile, the loss of Fukushima and Japan's apparent decision to gradually shut down its nuclear facilities elsewhere, means greater pressure on the world's energy supplies, a pinch being felt from Korea to Kentucky. On the US West Coast, some claim to have spotted the first wave of toxic garbage that the tsunami ripped from Japanese coastal towns and tossed into the sea.

Officially, there have been 15,850 deaths but there are still 3287 people missing. Some six thousand more were injured. In a country of 128 million, the 1 in 6000 who likely lost their lives were concentrated in a narrow band of communities that are physically, economically, and psychologically devastated. Whole neighborhoods wiped out, families with maybe a single survivor who is now wracked with guilt and despair, family members and friends still wondering about the fate of those who have not yet been accounted for (and probably never will be). Requiescant in pace.

I can't even begin to imagine what this might feel like. The people of northern Honshū, all the people of Japan, still need our help. My link to helping them through the Korean Red Cross is still at right (the one toward the top with the heart). It is still a time to reach out to a neighbor in need.