Stop me if you've heard this one 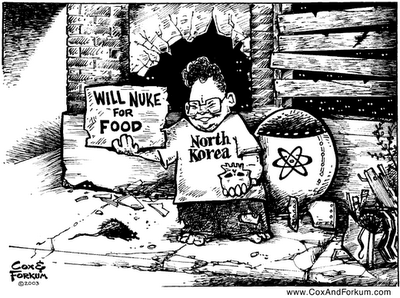 The Puk-mi talks between Washington and Pyongyang appear to have come to some fruition, with North Korea agreeing to put the brakes on its nuclear development program, for now at least.

I'm highlighting the "curbed nukes story" from the New York Times, since the Los Angeles Times looks like it's about to go into "paid premium" mode:


North Korea agreed to suspend nuclear weapons tests and uranium enrichment and allow international inspectors to monitor activities at its main nuclear complex, the North’s official news agency and the State Department announced on Wednesday. The promises could end years of a standoff that has allowed the North’s nuclear program to continue with no international oversight and are part of a deal that included an American pledge to ship food aid to the isolated, impoverished nation.

Although the Obama administration called the steps “important, if limited,” they signaled a potential breakthrough in the impasse over North Korea’s nuclear weapons program following the death late last year of the country’s leader, Kim Jong-il.

The US's apparent decision to start connecting food aid to progress on the nuke talks (mentioned in the top story here) may have had something to do with forcing North Korea's hand.

On the other hand, maybe this is what it looks like when a new regime is walking a fine line between trying to reach out to past adversaries without looking like a wuss (to external players or internal factions).

Like anything with North Korean promises, I'll believe it when I see it (Puk-mi indeed!). In the meantime, while I'm happy we may have slowed or stopped production of uranium, I'm less thrilled about the moratorium on nuclear tests, since I'd like to see North Korea deliberately and purposefully test their entire arsenal away.