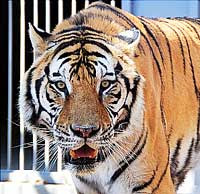 While we're getting news that scientists have decided to return Siberian tigers (the kind native to Korea as well) into the semi-wild of North Kyŏngsang Province in southern South Korea, there's also news that authorities are returning pure-bred bison into the sort of wild region along the US-Canada border in Montana.


Both moves are ideologically tied together: a return to nature as it once was, as even human society traditionally remembers it, a restoration of heritage (animal and human). We are bringing back something that was evolutionarily fit for its environment but couldn't do much when humans came with firearms and a twisted sense of sport.

Naturally, there are nearby people opposed to this because, well, tigers kill people (and so can wild bison, who also trample crops).

Frankly, I think they shouldn't stop there. I want Dr Hwang Woosuk, when he's done with the woolly mammoth, to get hold of some Ursus Californicus (California grizzly bear) DNA and set some of those cloned bad boys out in the wildlife.

We'll see how long NoCal's clandestine marijuana industry lasts then. (And frankly, it's an embarrassment that by 1922 we'd killed off the symbol of the state.)