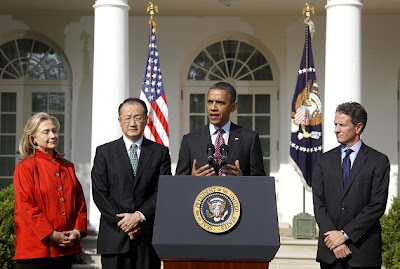 UPDATE:
Despite an unusual amount of opposition, Dr Kim was elected to the post in mid-April.

ORIGINAL POST:
Adding another brick in his wall of kyopos, the Korean education-obsessed President Obama has nominated Dartmouth College president Jim Yong Kim to be the president of the World Bank.

He brings to the job normally filled by economists a toolbox informed by his own medical background and experience with major health projects. From the Washington Post:


President Obama on Friday nominated Dartmouth College President Jim Yong Kim to head the World Bank, turning to a physician and public health expert to run an organization traditionally led by heavyweights from the world of finance or politics.

The choice surprised those who followed the administration’s search for someone to replace President Robert B. Zoellick when he leaves office in June. Kim’s lack of finance experience was cited as a particular concern for an agency that aims to strengthen private markets and build infrastructure — alongside the public health and social programs it underwrites in the poorer parts of the world. ...

“It’s time for a development professional to lead the world’s largest development agency,” Obama said at the announcement as Kim, Secretary of State Hillary Rodham Clinton and Treasury Secretary Timothy F. Geithner, a Dartmouth graduate, stood beside him. “Ultimately, when a nation goes from poverty to prosperity, it makes the world stronger and more prosperous for everyone.”

“Jim has truly global experience. He has worked from Asia to Africa to the Americas, from capitals to small villages. His personal story exemplifies the great diversity to our country.”

As someone in the public health field, I'm happy about this choice. For starters, health issues themselves have a way of leading to development when they are resolved (think of the pent-up potential that is released when a community no longer has to worry about clean and safe drinking water or high infant mortality). Moreover, a public health specialist might imagine and try to mitigate the potential downside (medically or socially) of some of the big ticket projects that the World Bank and IMF have been fond of lately.

The good doctor, incidentally, also has other skills that could be assets in this important position (go to 2:00):

His parents, who immigrated to Iowa (closest climate to Korea's) when Dr Kim was just five, are ecstatic. His mother beams with pride as she says "President of the World" and his father says, "Bank."