We don't know if it will be called the iPad3 or the iPad2S or (thanks to a lawsuit from a Chinese manufacturer claiming they'd trademarked the name "iPad") the iSlice1, so for the purpose of succinct discussion, we're going to call it the iPadX.

It is not enough for the iPadX to have a retina screen, since its competitors are already on their tail. No, the iPadX will with shrinking-man-retina displays, where the screen's resolution will be so sharp that you cannot detect individual pixels at a distance about the length of your extended hand even if you were inadvertently shrunken in an industrial shrinking accident where you found yourself sitting on top of an iPadX. (This is important because Apple has bought out some company's shrink ray process and is considering incorporating in future post-Siri hardware, just as soon as they can get enough Chinese workers to volunteer for a certain assignment and teach them all English.) Scientists may not agree on what exactly a "retina display" is at that level, but it's something like 1,028,000x960,000.

Apple was roundly criticized for ripping off its customers by calling the iPhone5 the iPhone4S, even though the iPhone4 was called the iPhone 3Gs and no one bitched about that. Apple wants to avoid this problem altogether, so the new iPadX will be called the iPad7. Or iPadπ. 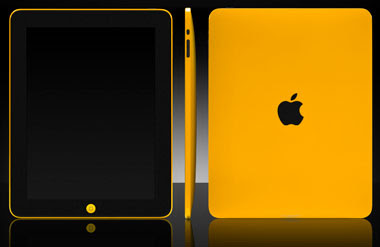 iPads will come in colors. It helps you reveal who you are.

Apple was also also criticized for coming out with an iPhone 4S that looked exactly like the iPhone 4. If it looks exactly the same, the hipsters groused, how will people know we're cool and hip if we buy one? (Samsung wisely picked up on this and made it a theme of their commercials, even though I had the idea first. Samsung is nothing if not derivative.) Sure, it's a flat tablet and the design of the iPad2 is already a work of art, but if the iPadX looks the same, proverbially heads will explode. Consequently, the iPadX will have fins. Though they initially appear to be just ornamental, Apple insists they have a functional purpose; they don't yet know what it is, but after millions buy them and do God knows what with them, one of them will figure it out.

All this extra stuff will be heavy, so efforts must be made to lighten the load. In the past, Apple has gone with titanium, which they replaced with aluminum. My sources in Shanghai say the iPad3 will be made from helium.

Email ThisBlogThis!Share to TwitterShare to FacebookShare to Pinterest
Labels: iPad (shoulda been iSlice)