What's in a nameplate?

Over at ROK Drop, GI Korea has presented a photo of the new Chevrolet Tattoo. As I wrote there, that seems an odd name for a car in Korea, given the negative associations with body art (particularly associations with gangsters, as well as the illegality of using them to evade military service).

I had thought about driving home the point with an analogy, that it would be like calling some vehicle the Jeep Tramp Stamp or the Buick Bong. And then I remembered Korea already had a line of vehicles starting with bong.

If the "Tattoo" name idea came from Detroit, all I can say is someone seems to have dropped the ball on that one. Then again, it could be from Korea-based GM Daewoo itself, the folks who brought you the Daewoo Impact in the 1990s. Yeah, the name sounds cool at first, until you realize you're driving a safety-impaired metal box named for what happens when you forcibly smash into another object.

Then again, poor name choices seem the order of the day. Kia is trotting out its new luxury vehicle. Continuing with the K3 (Forte), K5 (Optima), and K7 (Cadenza), we now have... wait for it... the K9. 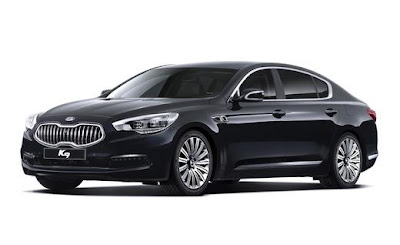 Yeah, in addition to sounding like it's a police car with an angry Rottweiler inside, how wise is it for a Korean car maker to make the name of its flagship model sound like the same thing mindless bigots and unclever comedians associate with Koreans eating for breakfast, lunch, and dinner? Anyway, the grille is supposed to be more feline (it's a tiger's mouth) than canine.

Anyway, in other car news, Hyundai and Kia have both been riding a wave of good fortune in the American car market, up 18 percent and a whopping 37 percent from the previous February, respectively.