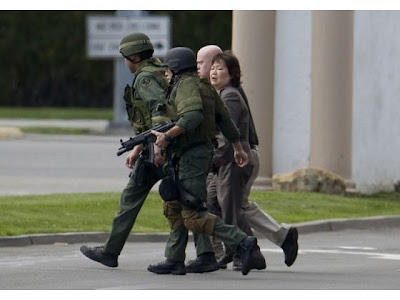 In an upscale part of Buena Park (the buena part of Buena Park), near Fullerton which has become a tony Korean-American enclave, a branch of Saehan Bank was held up at gunpoint by a kyopo man, although everyone except one bank employee was allowed to leave.


Police identified the gunman who was critically wounded during a hostage standoff at an Orange County bank as 55-year-old Myung Jae Kim, according to KNBC-TV Channel 4.

Kim appears to have targeted the bank’s manager, Michelle Kwon, taking her as a hostage instead of trying to commit robbery, police said.

Kim reportedly entered Buena Park’s Saehan Bank late Thursday morning, brandishing a weapon pointed to the ground. He ordered all of the employees and six customers out of the bank, but had Kwon stay behind, police said.

A tense standoff began, with police using a robot to deliver a phone so negotiators could talk to Kim.

At about 3 p.m., police shot Kim when he appeared in front of a glass door with a gun pointed at Kwon. He apparently went to the door trying to retrieve an item that he demanded from police, who refused to say what the item was. Kim was critically wounded and taken to the UC Irvine trauma center. Kwon escaped unharmed.

Good to see the robots are good for something other than putting English teachers out of work. Anyway, somewhere else they were saying that this particular gunman knew that particular bank employee and wanted her to compensate for the $240K that was supposedly taken from his safe deposit box at Hanmi Bank in Garden Grove (what we in OC call Koreatown). That is what triggered this violent act.

[UPDATE: The safe deposit box stuff is being reported in Korean-language media, but I haven't seen it in the actual articles in English-language media, only here and there in the comments sections.]

Anyway, things like this (or that nastiness in Atlanta) may be an indictator of what we should expect initially if guns were ever made widely available in Korea.

Note: I was nodding off when I originally wrote all this; I'm pleased that it generally makes sense.

Email ThisBlogThis!Share to TwitterShare to FacebookShare to Pinterest
Labels: Orange County crime story of the day