random mention of Korea in American entertainment media of the day 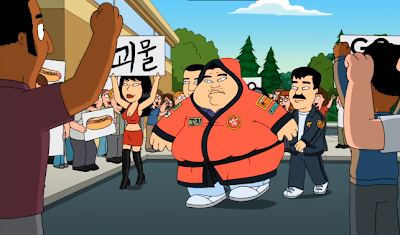 Not so much of a mention of Korea as an inclusion of Korean text. Hardly a rarity these days, but the thing is that the "monster" (that's what 괴물/koémul means) depicted in this Family Guy episode is supposed to be a Japanese competitive eating champion.

(The badge on his robe also says 꼬치/goch'i, the Korean word for shish kebab.) 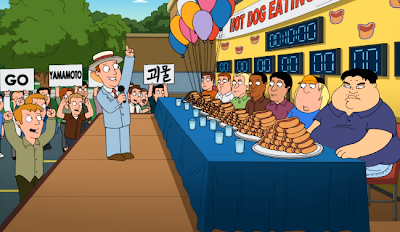 Or am I missing some really subtle political statement about the lingering resentment (han, if you will) held by Koreans toward Japanese over numerous brutal transgressions in the first half of the twentieth century, personified by the presumably Korean woman, and then a Caucasian man, holding up signs declaring that the Japanese eating machine is indeed a monster?

Email ThisBlogThis!Share to TwitterShare to FacebookShare to Pinterest
Labels: looking back on Imperial Japan, random Korea mention in US media, random randomness