In Korea, March 1 is Groundhog Day

As in the Bill Murray movie. Or so it would seem.

Every Independence Day (삼일절) in South Korea, the country and its political leaders look back on the colonial past with a sense of victory, owing to the nation's progress since liberation, along with a feeling of unresolved resentment and even bitterness (han, if you will) over the less than full-throated contrition by the brutal colonizing power itself (i.e., Japan).

You can go to Wikipedia and see a "list of Japanese war apology statementss," but that politically motivated entry doesn't include the, "but, but, but..." remarks that so often come with the actual apologies, or the statements of the right-wing parliamentarians falling over themselves to insist that PM Murayama's or PM Hosokawa's truly heartfelt and sincere apologies are just their own, or the later declarations by people in the ruling elite that the Comfort Women sex slaves were mostly prostitutes or that colonization was actually good for Korea. (The aforementioned list also lumps mealymouthed "statements of regret" in with actual apologies.)

No, from that self-serving litany, one wouldn't get the sense that any official Japanese apology, thus far, comes with an asterisk.

Anyway, on his last Independence Day as president of the Republic of Korea, Japan-born President Lee Myungbak decided to take on the issue. In a Marmot's Hole post well worth the read, President Lee is quoted as having said this:


For the two countries [Korea and Japan] to intimately cooperate as true companions, the true courage and wisdom not to avoid the historical truth is necessary above all. In particular, among many current issues, the Comfort Women issue is a humanitarian issue that needs to be concluded quickly. The grandmothers, who carried their pain in their hearts, are well past their late 80s. If they pass away without resolving the burden of their hearts while they were alive, it is not the case that all problems will disappear; rather, Japan will forever lose the opportunity to resolve this issue. This is why I urge the Japanese government to take a more active posture.

There is nothing I can find there with which I disagree. To many in the commentariat, however, their knee-jerk position is to do whatever is the antithesis of what most Koreans believe in, which prompted The Korean to write this:


The commentariat response on this issue, time and time again, never ceases to amaze me. It is as if they have no moral compass. This is one of the most heinous war crimes in World War II, and they think Korea is the bad guy.

Indeed, taking the Korean view and going the opposite way is, at best, an amoral compass. Sure, there are their oft-repeated justifications for taking the contrarian view — "They signed a treaty!", "Korea's post-war prosperity was built with Japanese money!", "This issue is nothing more than a cynical ploy to marshall support by corrupt politicians!", "South Koreans have sex slaves today!" — but the fact is that there are women living today who experienced the hell of brutal, unending, and often deadly sex slavery at the hands of the Japanese Imperial military and government. 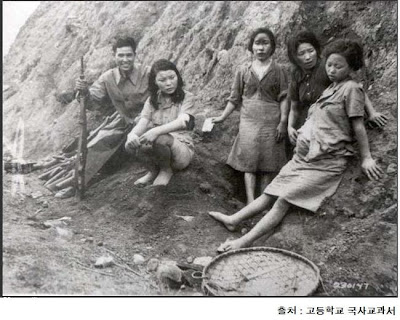 I'm sure for those women and those close to them, it's a bit difficult to "get over it and move on." But thinking about this stuff in human terms is just so bothersome. Wouldn't it be easier if they just died and stopped protesting? Then we'd have the convenience of this truly being "all in the past," to which many have already relegated it because, essentially, the plaintiffs are Korean.

I'm not 100.0% in agreement with The Korean, though. As I've noted in past posts (like here and especially here), I do think the South Korean government owes money to those women as well, even if I don't think that lets Japan off the hook. In 1965, Tokyo was trying to do an end-run on its victims by working with a pro-Japan former officer of the Imperial Japanese Army, Park Chunghee, an iron-fisted ruler of South Korea who used the grants and loans (see, it wasn't all a gift, as some have made it out to be) and used them for regional and national development instead of compensation for Japan's direct victims.

The Korean describes Park Chunghee and the 1965 Basic Treaty thus:


You mean, the contract that flatly contravenes jus cogens, negotiated and entered into by an illegitimate dictator who was formerly an officer of the Imperial Japanese Army, who did not even know the existence of the Comfort Women issue, without the consent of the people whose rights he signed away for less than a penny on a dollar?

The Korean, by the way, writes his own post on his own blog regarding the Comfort Women issue, also worth a read.

We'll have to see if President Lee gets anywhere with this. Expect it to be played out again in August, around Liberation Day.

In the meantime, another commenter, Yuna, pointed to what the Comfort Women survivors themselves are looking for, lest one think, as the nattering nabobs of uri nara naysaying say, that no apology will ever be good enough:
All told, doesn't sound terribly unreasonable (though guidance should be given for what constitutes an "official apology" and by whom under what authority). But if your counterpart's goal is to whitewash history and deal with a painful past by rationalizing it or just ignoring it, it might be a tall order. There are a lot of good people in Japan who recognize this as wrong (or would if they knew better about the issue), but there are those in power who are beholden to a sanitized view of the past where Japan was the victim of World War II, not the instigator.

Some day in the near future, it would be wonderful if we could stop replaying this issue as if March 1 really were Groundhog Day. That would take an effort on both sides, but the ball is clearly in Japan's (imperial) court.