Picture of the day: Obama seeing red at the DMZ 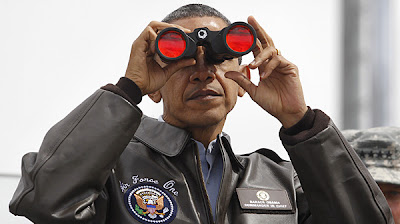 US President Barack Obama is visiting South Korea for the nuclear summit, and he has decided to take a side trip to the demilitarized zone, aka the DMZ, his first trip to the de facto border between the two Koreas.


The visit was Obama's first to the demilitarized zone that has divided North and South Korea for nearly 60 years, and comes at yet another tense point in relations with the secretive nuclear power in the north.

Obama met with South Korean and U.S. troops, and like presidents before him, stood in a camouflaged bunker peering through binoculars to inspect the rough, wooded mountains of a nation that has frustrated the West for decades.

The president is in South Korea to attend a global summit on securing loose nuclear weapons. But as his Sunday schedule shows, the status of the rogue nuclear program in North Korea is likely to outshine the formal agenda. The DMZ visit was his first stop. ...

But first the president headed north about 25 miles from Seoul, beyond the roadblock, mine field and barbed wire fencing to a windswept watch station 25 meters from the demarcation line. Obama looked out from behind bulletproof glass at the two small villages on each side of the line -- Tae Sung Dong, the tiny South Korean town dubbed Freedom Village and Gi Jong Dong, known as Propaganda Village for its fake buildings and speakers that once blared messages trying to lure soldiers to the north.

The messages no longer play. And Sunday, Obama looked out in cold quiet as a North Korean flag flew over the village, lowered to mark the end of the 100-day mourning period for the late leader.

"There's something about this spot in particular," Obama said in his remarks to U.S. troops. "where there's such a clear line and there's such an obvious impact that you have for the good each and every day that should make all of you proud."

The DMZ has long made a dramatic backdrop for a presidential visit, as a rare reminder of Cold War anxiety and America's continued reach. The trip has been one that all of Obama's recent predecessors have made. (President George H.W. Bush visited as vice president.)

President George W. Bush visited the DMZ in February 2002, at another tense time in relations. Bush had just included North Korea in the "axis of evil," a remark that unnerved South Koreans worried about the increasingly bellicose rhetoric. Bush then delivered a toned-down speech and expressed sympathy for the plight of North Koreans.

Obama arrived on much better terms with South Korean leaders. During his three-day visit, he's expected to emphasize solidarity with Seoul and make his first comments on the status of the food aid pact.

I've been to the DMZ probably a half dozen times at least. It's a very sobering trip, and a must-see for any American visiting South Korea.

One thing, though, I wouldn't describe the surrounding hills of North Korea as "rough, wooded mountains." Rough, yes. Mountains, sure. But wooded? Not really. You can see from the southern side how denuded the terrain is on that side. I'm not sure if that's by design (don't give an invading military any cover) or if it's because things have been so tough up north for so long that they have burned away any potential fuel source, including the once numerous trees. We certainly saw something like that across Korea during the deprivation of the late Imperial Japanese colonial area.

Anyway, I like how Obama has his name on his badge, lest we not be able to figure out who he is. 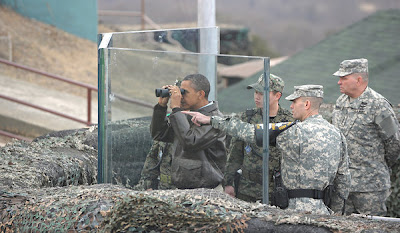