An update to an iconic picture 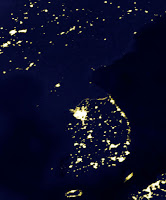 I believe that at this point, every man, woman, child, cat, and dog on the planet has seen this satellite image of the Korean Peninsula, showing South Korea and a little bit of neighboring Japan all lit up, with North Korea in pitch black (in North Korea, every day is Earth Day).

According to The Marmot, a new picture has been making the rounds in South Korea showing the same thing. Again, we see that the cities of prosperous and free nations South Korea and Japan are, at dusk (or dawn), awash in light, whereas North Koreans had better get home or else they'll be stumbling in the dark. 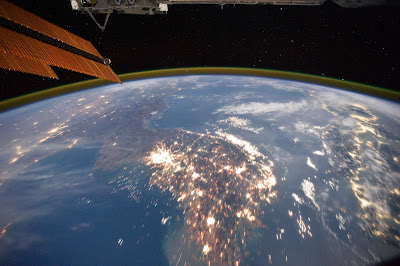 The Marmot says he's not sure if it's real, but believes it could be. Prompted by that, I did a little investigation (I like investigating photos), and my conclusion is that it is probably legitimate.

Through this site, I've traced it to the International Space Station, which snapped the photo on October 11, 2011. 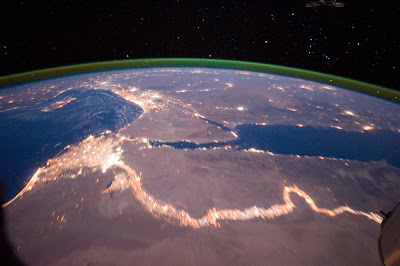 Moreover, it appears not to be doctored, as the same site cites similar photos of other parts of the world. Above is Egypt, Israel, and their Middle East surroundings. This photo is interesting for much of the same reason: it starkly depicts how much of Egypt's 90 million-strong population lives along the Nile. It also shows how prosperous Israel seems compared to its neighbors.

What I don't understand is how we can spend so much on an International Space Station that only turns out blurry pictures.

UPDATE:
A Marmot's Hole reader says the photo of the Korean Peninsula can be found here, but I can't verify it since Google Chrome is not playing nice with Quicktime on my four-year-old iMac at the moment. The date in the URL seems to indicate January 2012, though, so I don't think it's from there. [mini-UPDATE: I did not see Korea in that China-to-Australia run once I got it going.]