Sometime around July, the imperial couple will make what I believe is the first visit by a Japanese emperor or empress to the site of Japan's attack on the United States that ushered in American involvement in World War II. 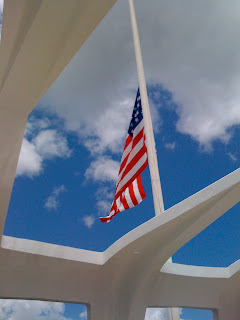 That should be interesting. If I'm in Hawaii when they're here, I'll try to attend one of the events where they come by, like at a Japanese cultural center or something.

[left: The Stars & Stripes at perpetual half mast over the sunken USS Arizona. I took this with my iPhone, which has amazingly vivid color. Despite the simple camera with which it was taken, this photo encapsulates my mood whenever I visit that site.]

But it would be a thrill to visit Pearl Harbor with them. I'd be curious what they have to say, since a usually blasé American public might have a sudden heightened sensitivity about Pearl Harbor.

I doubt they will say things like what my friend "Shinobu's" hometown friend "Mika" said. I played taxi driver for them when Shinobu wanted to show Mika all the sights on Oahu, including Pearl Harbor. After the trip to the USS Arizona itself and then a somber half hour of reading carefully all the displays, Mika turned to me and Shinobu and said, "This is terrible, but I heard that Japan had no choice."

Yeah, if the Emperor or Empress said something like that, it wouldn't go over too well with much of the American public (in fact, it would probably draw attention to the blatant revisionism at Yasukuni Shrine's Yushukan Museum).

But truthfully, I doubt those two harbor any such beliefs. Aloha, Imperial Family. You're always welcome here.