Q. "Little Saigon," "Korean District" – more and more road signs are appearing on the 22 Freeway that seem to indicate we are no longer in the U.S. Who approves these road signs? What is the point? And who pays for these signs? American taxpayers?

Traffic is a big deal in Southern California, so naturally all the papers have traffic columnists. Dave Crow asks an interesting question that is pregnant with subtext. Despite living in a multi-cultural society like the United States with ethnic enclaves being a part of the national fabric for centuries, Dave Crow feels he's "no longer in the U.S." when he sees places in OC like Westminster's Little Saigon (touted as the largest Vietnamese community outside Vietnam) and Garden Grove's Koreatown that no one officially calls Koreatown even though it's a Koreatown. 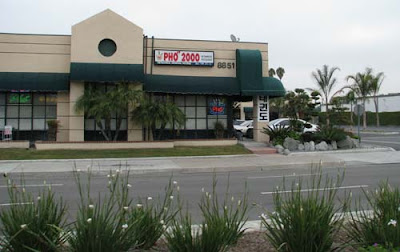 And then there's his apparent assumption that the people who would benefit from these signs (i.e., the merchants of Little Saigon and de facto Koreatown) are not "American," or at least not "American taxpayers." If not, then just what the hell are they?
Jim Radcliffe, who writes the OCR's "Honk" column, was diplomatic in his response but shows his clear disagreement with Jim Dave Crow:


A. Honk likes 'em, Dave, so he knows where to pull off of the 22 to find a Lee's (Vietnamese) Sandwiches. But, alas, you didn't ask for his thoughts, did you?

To get your info, Honk chatted with Caltrans spokesman Allen Shahood, who said that usually a civic group asks for such things, then it is considered by Caltrans and, if approved, the sign's sponsor picks up the tab.

Not sure how many peeps find the signs un-American, Dave, but such freeway signs, which tell motorists how to get to ethnic communities, are as common as SigAlerts.

Shahood said Caltrans wants the signs to be simple. And, of course, the agency has to guard against a freeway becoming choked with too many signs so that motorists actually can read them.

Good on you, Mr Radcliffe. Why should these be un-American? For that matter, why should these signs be seen as being only for the benefit of Vietnamese-Americans or Korean-Americans? It's showing everybody where to go for Lee's Sandwiches or a good Korean barbecue. Maybe OC residents on a tight budget can use the signs to find an affordable Korean supermarket.
To be fair, though, I have sympathy for Dave Crow's sentiments, but only up to a point. The language of medium for California and the rest of the United States is English, and it is not a good thing if those who speak only English are made to feel like strangers in their own communities because of signs put up by merchants. Although the freeway signs Dave Crow is complaining about are in English, the communities he's griping about use a great deal of Korean, Vietnamese, and even Chinese in their signage.
Because of that I support efforts to require that public signs (e.g., on businesses, etc.) place English as dominant or equal to whatever other language the sign might be in. At the very least, signs intended for the public should not be exclusively in a language other than English.
I happen to know that 여행사 means "travel agency" and 순두부 means "tofu stew," but Mr Crow may not. And that means he will not venture into those places and instead will feel isolated from his own surroundings. Shopping centers with signs like this one from the staged Korean shopping plaza in CSI will only lead to ethnic stratification, and that's good for no one. 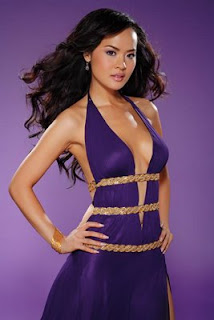 [left: Actress Helena Hồng Ngọc of "Little Saigon's Love Story." Helena Ngoc popped up in my Google image search for one of the ethnic neighborhood signs off the Garden Grove Freeway, which turned up nothing. Trust me, we're all better off this way.]
But that's only one side of the issue. Even if all the Korean-run businesses up and down Garden Grove Boulevard or all the Vietnamese-run businesses along Bolsa Avenue were to put up bilingual signs, would Mr Crow ever venture into one? Or would he simply grumble to himself as he drives past, saying this doesn't feel like America anymore?
If it's the latter, then he's the one with the problem. Open your eyes, Mr Crow. There's a world of cool experiences out there. Go to Little Saigon and get some dimsum (they'll provide forks if you need it) or Vietnamese coffee (it's got quite a kick). Go to a noraebang (look for these characters: 노래방) and belt out some Beatles tunes (start with "All You Need Is Love"). Go get some hearty meat dishes with copious vegetables. Orange County is an ethnically rich place, and it's sad if you don't enjoy it. And even sadder if it keeps you locked inside your house and car.
(By the way, here's a Los Angeles Times article from 2007 talking about plans to make Orange County's Little Saigon more like New York City, with lofts and what-not above the shops.)
UPDATE:
I have linked this post to several places (including here and here) where there has been a discussion about Koreans using 외국인 (oégugin, 外國人; a counterpart but not equivalent of the Japanese gaijin), a word often simplistically translated as "foreigner," even when outside Korea when most others would perceive the Koreans as "foreigners."
I linked this post because I think it is a clear example of how an ethnicity- or race-based us-versus-them attitude is by no means an exclusive Korean trait. Unfortunately, it's quite universal, but most people who are in the ethnic or racial majority of their home country have probably had little chance to experience that kind of thing first hand in their home country (this is known as "racial transparency"). As I wrote at Brian's:

Sometimes it sucks to be a minority. And no matter where you're from, I'm pretty sure minorities there don't have a rosy time all the time with the "majority" population there. Even in the United States, millions upon millions of Asian-Americans are still seen as different and not even fully American by some Whites (and Blacks).

Nevertheless (and perhaps I'm naïve), but I hope that the "Jim Radcliffes" of America outnumber the "Dave Crows" (and my apologies to Mr Dave Crow if it seems I'm picking on him for this view, which he may in fact feel I've misinterpreted).
on March 02, 2009