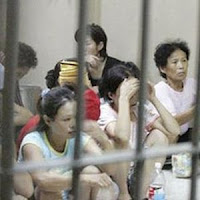 This China Daily op-ed piece, mentioned in the Daily Kor for February 29, has got me furious. I hate being reminded over and over again why Beijing simply can't be trusted when it comes to human rights, giving South Korea a fair shake, or doing the right thing vis-à-vis. I had been hoping they were finally coming around on the dangers of having a rogue state on their doorstep, enough that they were trying to push reform in earnest, but I'm not so sure.

Anyway, here is the op-ed, with my multiple fisking...

As the Korean peninsula is at a crucial stage of regaining peace and stability, it is important for DPRK and the United States to resolve differences through dialogue and to promote the early resumption of the six-party talks.

Okay, I'm with you so far, although I'm afraid the six-party talks have the potential for Pyongyang to milk more money out of Washington, but that's another issue for another time...


Inexplicably, South Korea recently stated that China violated international rules in dealing with DPRK nationals who have illegally entered China. The statement shows disrespect for China's active and constructive role in restoring peace and stability on the Korean peninsula, and is a hurdle to the restart of the six-party talks.

Inexplicably? This is unexplainable only true if you utterly ignore that North Korea will certainly imprison and torture, and probably kill, the defectors you are sending back. Clearly they are refugees, not "illegal aliens," as you say below.

This is not a disrespect of China's role, but a respect for human rights. Frankly, I wouldn't expect Beijing to understand that, since it seems stuck in the pre-democratic phase that its neighbors managed to get out of back in the late 1980s.

As for China's "constructive" role, about the only thing being constructed is Chinese port facilities in North Korea's Najin port. When Beijing backs Pyongyang after it shells South Korean territory and sinks South Korean ships unprovoked, its "role in resting peace and stability on the Korean Peninsula" is anything but "constructive."


The DPRK nationals who illegally entered Chinese territory for economic reasons are illegal aliens, not refugees. China is handling the issue prudently and properly in line with domestic and international laws and humanitarian principles. Its treatment of illegal aliens serves the interests of various parties, and conforms to international practice. Any attempt to internationalize or politicize the illegal immigration issue would be in vain.

Indeed, they entered Chinese territory illegally, but that does not mean they are not refugees. Food is used as a reward and a means of control, and those whose families are lacking it so badly that they need to cross into China are refugees. By failing to recognize that, you are also failing to "handle" this issue "in line with international laws and humanitarian principles." Indeed, when you are sending them back to face torture and probably death, it is anything but humanitarian.

As for the "various parties" it serves to treat "illegal aliens" from the DPRK the way it does, we all know the parties are the regimes of China and North Korea and no one else. It conforms to "international practice" only of states like North Korea, China, Iran, and a few other outposts of tyranny that still exist. China's desire for a secure buffer state along its northeastern border has required a deal with a devil. 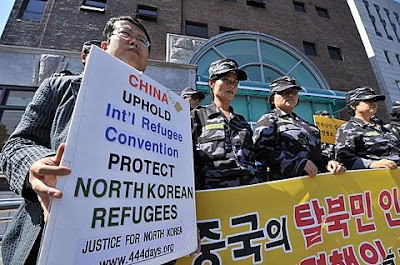 Pointing out the imminent danger faced by these dozens of refugees and the thousands like them hiding in North Korea if they are repatriated is simply pointing out the obvious. It is not "politicizing" the issue, and it is being "internationalized" only because China is willing to send these people to their deaths. This issue could easily be resolved if China would simply allow these North Korean refugees to leave China through any other country besides North Korea.


The Korean peninsula is facing many severe challenges, and could not have enjoyed even temporary stability without China's active and constructive role. As a major stakeholder on the peninsula, South Korea knows best how the peninsula rode out the hard times in the past.

Bull-fucking-shit. China's "active role" began with invading Korea in 1950 to prop up Kim Ilsung and it has continued for the past six decades with aiding and abetting a regime that has killed millions of its own people. That is destructive, not constructive.

It's laughable that you would say South Korea knows best how the peninsula rode out the hard times in the past, because China is responsible for those hard times.


During the sixth-party talks a few years ago, a consensus was reached to ensure the denuclearization of the Korean peninsula, normalization of relations among relevant countries, and establishment of a Northeast Asian peace and security mechanism, which is crucial to bringing lasting peace and stability to the region. The 9/19 joint statement issued at that time is not outdated, instead it is still of practical guiding significance. Any violation of the principles established in the joint statement would undermine the peace process, and damage the interests of South Korea and other stakeholders.

How would releasing these refugees "undermine the peace process"? For that matter, how would it "damage the interests" of South Korea or anyone else?


The bumpy course of the sixty-party talks shows that playing petty tricks out of domestic political considerations or seizing the initiative by causing unnecessary troubles will complicate matters, increase uncertainty, and hurt both oneself and others.

Dozens of lives are at stake. To diminish the effort to save them as "causing unnecessary troubles" is to show how utterly crass Beijing is as a government.


As a main participant of the six-party talks, China gives top priority to the overall situation, and is firmly committed to restoring peace and stability on the Korean peninsula despite all hurdles. China does not like to cause troubles, and is not afraid of getting involved in troubles. As a responsible country, China will continue to play an active and constructive role in promoting peace in the region. All parties concerned should give due respect to China's efforts, and stop undermining the peace process on the Korean peninsula.

China gives top priority to the overall situation, meaning "we will throw anyone under the bus if we see it necessary in pursuit of our interests." If ever there were a time to start a boycott of goods from China, particularly those run by the Communist Party or its cadres, this is it.

By sending those dozens of North Korean refugees back to North Korea, my friends in China, you are an accessory to murder.