Linsanity is Linfectious, and it has spread across the ocean. The Los Angeles Times is saying that while the Chinese people are ecstatic about Jeremy Lin (you could say they're Linthusiastic) the Chinese government is a bit more on the fence (let's say they're amivaLINt). 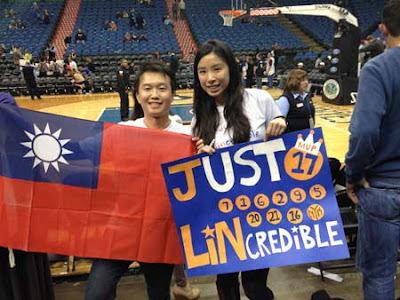 The rising star is, after all, of Taiwanese descent, not Mainland Chinese descent, and he's a Christian. These are two characteristics that make them LINeasy:


Chinese television has yet to broadcast a full Knicks game this season, ostensibly because of scheduling conflicts. Although Lin has become a popular subject on sportscasts, the hosts tend to steer clear of his religion and Taiwanese heritage.

"Traditional media do not touch the issue of Christianity," said Zhao Jing, a closely followed political blogger in Beijing who goes by the pen name Michael Anti. He said Chinese authorities may also be wary of broadcasting full-length Knicks games because of Taiwanese flags, which are barred from display on Chinese television, waving in the stands.

Taiwan, of course, is a Lin-egade province.

Okay, I'll stop that. (At least I didn't say provLINce, though I was tempted.)