North Korea’s new leader, Kim Jong Un, supports an agreement to build a natural-gas pipeline from Russia to South Korea via his communist state, the Russian envoy in Pyongyang said.

“All these existing agreements are supported by the new leadership in North Korea,” Russian Ambassador Valery Sukhinin said in a phone interview today from the North Korean capital. “Talks now are taking place between the parties implementing the project, from our side Gazprom, and from the North Korean side, the oil industry ministry.” OAO Gazprom is the state-run Russian gas-export monopoly.

Kim’s father, Kim Jong Il, who died in December, agreed to the gas pipeline at a meeting in August with Russian President Dmitry Medvedev near the Siberian city of Ulan-Ude. Russia said the energy deal was part of efforts to win concessions on North Korea’s nuclear-weapons program. 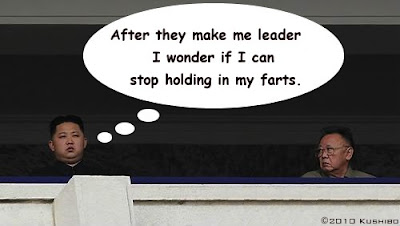 It's been a while since we've talked about the natural gas pipeline that Russian and South Korean leaders want to lay through North Korea, but apparently the Prodigious Progeny is renewing the prospect. And just in time for annual begging-for-food season.

Too bad, for the sake of North Koreans in the lower echelons of society, we can't bring Juneuary to the DPRK.

Anyway, for my thoughts on the wisdom of having such a pipeline (or lack thereof) see here, here, and here. Of course, it's a somewhat different discussion now that Kim Jong-un is in charge: Could construction of a pipeline and the international agreements necessary to build it and maintain it be what is needed to coax North Korea from isolation, or is there still high potential that the Pyongyang regime will use the threat of cutting off the gas supply as a means of squeezing out concessions from Seoul, as they would have done under Kim Jong-il?