Meet the new boss, same as the old boss... 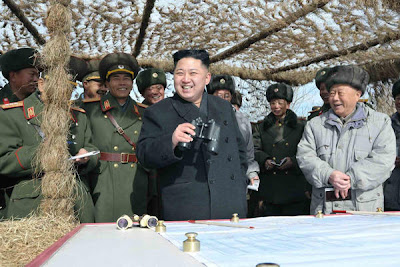 We're talking about Kim Jong-un, of course, and how the bluster has continued unabated right through the Dear Leader's wake and the Prodigious Progeny's takeover and makeover. This is, of course, because the real people controlling things are people behind the scenes, not necessarily those sitting on the throne.

Anyway, North Korea has been turning up the heat by promising holy jihad against South Korea and the United States as the two allies prepare for annual military drills. And to that, the Christian Science Monitor asks whether we should be taking this seriously at all.

It's worth a read, but my own take sounds fairly close to the gist: This could all be empty rhetoric designed to whip up fear and pride in the masses and make sure they remember there's a bogeyman out there, just in case they get any big ideas about overthrowing the government to avoid starving to death, and all that, but the actual strikes on South Korean islands (namely Yŏnpyŏng-do) and the sinking of the ROK Navy vessel Ch'ŏnan give us pause that they might actually try a repeat of something like that in order to get us to take them seriously and to get people like me (and Don Kirk, etc.) to stop referring to their bluster as empty rhetoric.

If there really are competing factions within the Pyongyang regime, the chance of this happening is greater, because the last thing that the militarists want (note, I did not say military) is reform, appeasement, and a world where Truth Commissions remain a future possibility.