[UPDATED] Maybe it's supposed to be accents grave and aigu 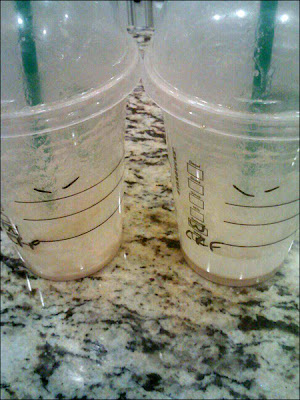 I guess "chinky eyes" really is becoming a thing:


Last month at a Starbucks Coffee location in Alpharetta, Georgia, two Korean customers -- who are not native English speakers -- discovered that their barista had identified them by drawing "chinky eyes" on their drinks. You know, where they usually write your name? OH NO THEY DIDN'T. Yes, they did.

You cannot tell me those are both just two random squiggles on those cups. I'm told that the customers immediately complained to the store manager, who did not defend the drawings or offer some kind of bullshit explanation, but simply apologized. And that's it. Oh, sorry for the racist way we run our coffee joint.

I guess he's not "angry asian man" for nothing. I would have suggested the pair hold out for free Starbucks vouchers — that's what I got when Starbucks gave me the worst bout of food poisoning ever after they kept using the milk in their refrigerator in spite of a four-hour blackout that had hit the place.

Anyway, along with Chick-Fil-A, this seems to be an Asian-mocking trend, started by Miley Cyrus (I know that's not true; please don't send me letters), so I'm going to suggest to all who are on the fence about whether or not this is offensive, that they avoid the following emoticons.


` ´
We've already established that this is a no-no.
OO
If you work at a Starbucks in Seoul and this is
how you wish to identify your White customer, please stop.
O O
>
No, that's even worse.
O O
oo
Don't make fun of people with big noses or flaring nostrils.
oo
´ `
Don't make fun of people with Pancho Villa mustaches.
o
OO
/ || \
/ \
Identifying big-boobed women is also a no-no.
I shall stop now. The humor here is starting to exhibit diminishing returns. Plus, it's very, very late here.
UPDATE:
I finally realized why the cups looked so familiar: With the rounded "heads" formed by the lid and the "chinky eyes" accents grave et aigu, they're supposed to be the mushrooms from Fantasia! And that's not racist at all. 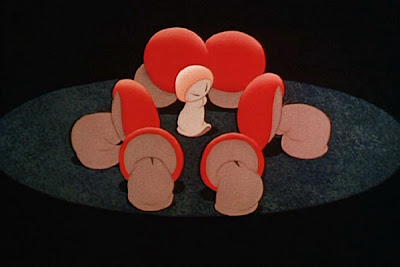 UPDATE 2 (February 15):
It took him nearly a week, but The Marmot's Hole (the K-blog of record™) finally put something up on this. (I had thought linking to TMH in my own post might have gotten his attention; also, someone in his own comment section mentioned it, I think.) The Marmot is a busy man.

UPDATE 3 (February 19):
OMG! It looks like some Starbucks employees really are doing the "big nose" thing on their cups (the third icon in my list above, after 코쟁이 and its variants, a derogatory indicator in Korea for foreigners, especially White people).

Courtesy of hardyandtiny at The Marmot's Hole, I give you "beady-eyed big nose": 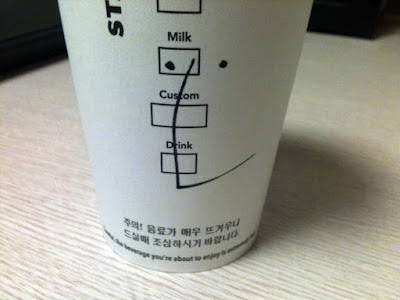 Of course, that "nose" could just be a big "L." Does Starbucks sell anything that begins with "L"?