Is Hines Ward's NFL career over? 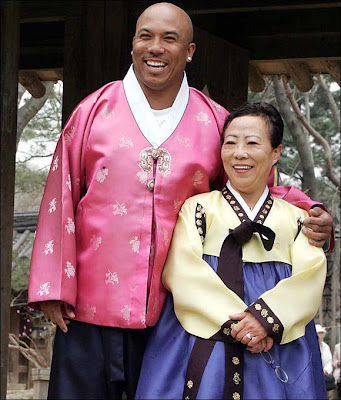 Earlier today, there were reports that Hines Ward, probably the most famous Korea-born player in American football, would see his career end soon as the Pittsburgh Steelers sought to get out of the last year of his contract. Ward, who has always and only been a Steeler, is now suggesting he is willing to restructure the end of his contract, which had called for him to be paid $4 million this coming season:


Pittsburgh wide receiver Hines Ward said Saturday he's willing to restructure his contract in order to remain with the team after a report said the Steelers are planning to cut the 14-year NFL veteran.

Ward posted on his Facebook page that he wants to "finish my career with the Pittsburgh Steelers" and said he's told the team he's willing to make changes to the final year of his $4-million contract.

Ward's comments come on the heels of an NFL Network report that said the Steelers are looking to cut Ward in an effort to get under the salary cap. The Steelers' all-time leading receiver is coming off his worst statistical season since his rookie year in 1998, finishing with 46 receptions, 381 yards and two touchdowns.

The guy is thirty-five years old, which is positively octogenarian for the NFL, so he knows he isn't going to be around much longer as a pro football player, but it's just human nature to want to end one's career on one's own terms. Whether you're thirty- or sixty-something, who wants to get the axe a year before retirement?

Anyway, since his career is nearly over, this is as good a time as any to ask what Mr Ward should do next. Some suggestions:
Feel free to share your own.

* Mishik ch'ukku (미식축구) is what it's called in Korea, but it's known around the world as "American football." In America, it's known as "football."