A Mitt of the people

With Mitt Romney stepping in it with $10,000 bets, giddy proclamations that he enjoys firing people, announcements that he doesn't really care about the very poor, and revelations of Swiss and Cayman Island bank accounts, there are concerns that not only does Mittens fail to connect with the average Joe and Jane, but that Joe and Jane may not want to connect to him come November. And thus we can imagine this kind of discussion at the Vote Mitt 2012 headquarters:

AIDE:
Sir, you are having trouble convincing average Americans who have been dealt a body blow by the economy and the housing crisis that you actually understand the problems they're facing and how to solve them. What you need to do is get out there and spend time with someone like them. You know, some aging, fat bald guy who knows the pain of bankruptcy.

MITT:
I know just the guy! 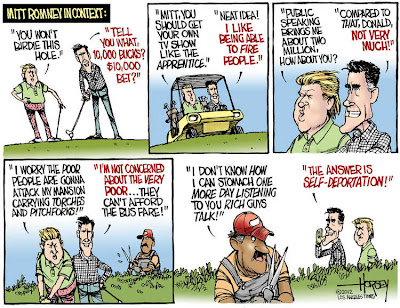