Does this mean we can longer use the Gulf of Mexico as a counterpoint to Korean nationalists' drive to rename the Sea of Japan as the East Sea?

'Cuz someone in Mississippi is proposing that we change it to the "Gulf of America." (And why not? We're always the ones having to clean it up!)


Daniel Cherry of Mississippi Public Broadcasting just talked with Rep. Stephen Holland — the Democratic lawmaker who's getting a lot of attention for introducing a bill to rename the Gulf of Mexico to Gulf of America.

Holland told Daniel that so many of his Republican colleagues seem to want to push anything or anyone Mexican out of the state that he's just trying to "embrace" their cause and help them out. In other words, he's introduced a bill that he thinks will make a satirical point by being outrageous.

Hmmph... "it's meant as satire" is often what you say in order to wiggle your way out of controversy after you've said something publicly that, in hindsight, you really shouldn't have said. But this time I think he means it. 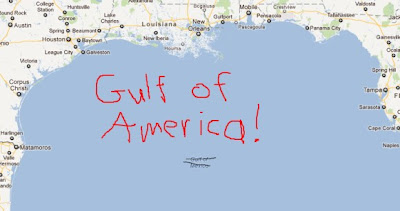 Anyway, the real controversy will come when the states of Minnesota, Wisconsin, Iowa, Illinois, Missouri, Kentucky, Tennessee, Arkansas, and Louisiana decide they don't want their riparian border associated with mullet-sporting bigots living in trailers who still have the Confederate ensign in their state flag. I think River of America has a nice ring and is easier to spell (though that could cause confusion with the American River in California, where gold was discovered, and invite a lawsuit from Disney).