Will this get their attention? 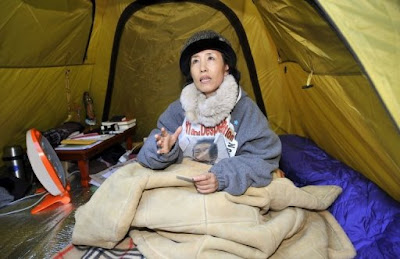 A member of the National Assembly who has been staging a hunger strike in front of the Chinese embassy says she will do so until death unless China ends its policy of repatriating North Korean refugees back to the DPRK:


Park Sun-Young, from the conservative opposition Liberty Forward party, said she wants "fundamental change" in China's policy of sending back the North Koreans rather than treating them as refugees.

"Either they change the policy or I die, as I have no intention of stopping (the fast)," Park told AFP in a weak voice.

Activists and Seoul lawmakers say about 30 North Koreans who recently fled to China will soon be sent back. They face harsh punishment or even death in their homeland, according to protesters.

Park appeared fatigued but still took part in a rally -- the latest in a series -- outside the embassy Monday.

The 55-year-old legislator, clad in thick sweaters against the sub-zero night temperatures, is living in a tent outside a church in front of the embassy. ...

A Seoul parliamentary committee last Friday criticised China's policy of repatriating the refugees as economic migrants and urged it to follow international rules.

The resolution followed media reports that nine North Koreans have already been sent back despite pleas from Seoul.

"This isn't a problem just between China and Korea. It is a worldwide issue, a matter of human rights that citizens all over the world must see and mend together," Park said.

Normally, I would think such an act is futile: Hunger strikes might work within a country to get the government to change its action or risk negative local and global press (and whatever consequences that brings), but it's harder to make it work against another country.

However, this being in the global news day after day might eventually cause it to seep through the Great Firewall of China, and more and more Chinese will start wondering what this is all about. One thing I've noticed from my discussions with students from Mainland China here in Hawaii is how utterly ignorant they are of China's policies vis-à-vis North Korean refugees. So in this case, the hunger strike might prove a very useful educational tool.

And now I should call one of my Beijing journalist friends and point her toward this story.