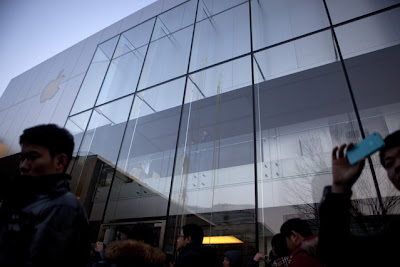 Korea bashers like to point to the Lone Star case (in which the Lone Star people ended up making a buttload of money, by the way) as an example of how Korea is too tough a place to do business, frequently citing it as a reason why foreign companies eschew Korea and go instead to China.


Apple Inc.'s fight to use the iPad name in China has hit another snag after authorities seized dozens of the Apple tablet computers from store shelves in northern China.

The seizures in Shijiazhuang, the capital of Hebei province, were in response to a trademark infringement complaint filed by Chinese company Proview Technology, according to its attorney. Proview Technology, which is based in the southern Chinese city of Shenzhen, said it holds the trademark for the hot-selling device in China.

In December, a court in Shenzhen unexpectedly rejected a lawsuit in which Apple said it was the rightful owner of the iPad name.

Since then, Proview Technology has filed complaints in 20 cities, urging authorities to prohibit the California tech giant from selling or marketing its device. The company has also filed lawsuits against Apple and retailers in Shanghai, Shenzhen and Huizhou, a city in southern Guangdong province.

"You'll likely see more and more actions across the country," Xie Xianghui, Proview Technology's lawyer, said in a phone interview Monday. "Apple did not follow Chinese law, so we're confident the authorities will side with us."

Sorta reminds me of how Carrefour left its booming — but not #1 or #2 ranked — operations in Korea for supposedly greener pastures in China, only to become a tool in Beijing's engineered anger against France later on. (Forgive me for sounding bitter about this, but I have long felt that the flood of American, European, Japanese, Korean, and even Taiwanese capital and jobs into the People's Republic of China is borne of a dangerous mixture of intellectual laziness, political and social ignorance, and brazen greed, and it does no one any good, in the aggregate, including the people of China.)

I guess Apple should have seen this coming. And I'll be they're kicking themselves for not going with my iSlice idea. 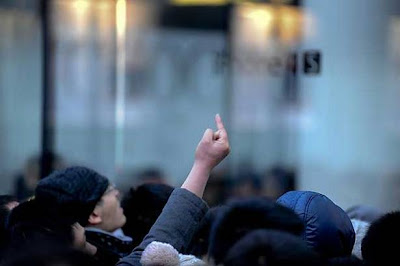