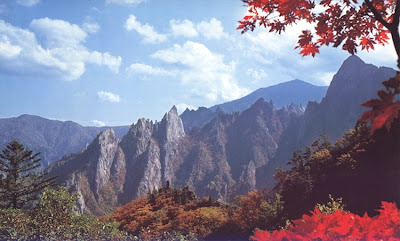 Bloomberg is reporting that a New York City-based purveyor of spirits may be taking over the job of promoting North Korea's Kŭmgangsan resort, namely the facilities built by Hyundai but taken over by Pyongyang:


Korea Pyongyang Trading USA, a New York-based liquor importer, is working on a plan to attract travelers to Mount Geumgang on the east coast of North Korea, a country the U.S. State Department permits Americans to visit while warning it has a history of arbitrarily arresting foreigners.

The “Diamond Mountain” resort, opened in 1998 by the two Koreas as a symbol of hope for reunification, has been closed to South Koreans since 2008, when the late Kim Jong Il’s troops shot and killed a guest walking on a restricted beach.

Simon T. Bai, 67, director of marketing and planning for Korea Pyongyang, said the company wants Americans to visit North Korea to give the nation exposure to freedom and democracy. The company was hired in July to study opening a casino at Geumgang, according to documents it submitted to the U.S. Department of Justice in December under the Foreign Agents Registration Act.

It sounds like it's a justification for doing business with the regime, though it should hardly come as a surprise that such a rationale would come from someone who makes a living feeding people's addictions.