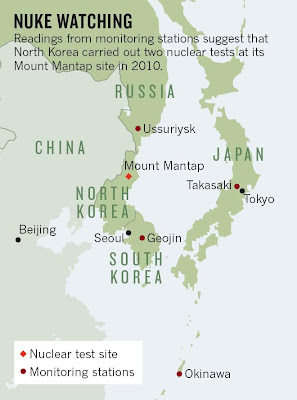 That's the suggestion being made in Nature, based on isotope readings found around the region:


North Korea may have conducted two covert nuclear weapons tests in 2010, according to a fresh analysis of radioisotope data.

The claim has drawn scepticism from some nuclear-weapons experts. But if confirmed, the analysis would double the number of tests the country is known to have conducted and suggest that North Korea is trying to develop powerful warheads for its fledgling nuclear arsenal.

It might also explain a bizarre statement issued by North Korea's state news agency in May 2010, which said that the country had achieved nuclear fusion. The news was largely ridiculed in the South Korean and Western media — but it was not so quickly dismissed by the small circle of experts who devote their careers to identifying covert nuclear tests. South Korean scientists had detected a whiff of radioactive xenon at around that time, hinting at nuclear activity in its northern neighbour, which had already tested nuclear devices in 2006 and 2009.

While I'm not terribly happy they're developing nuclear fusion, I'm pleased as punch they're depleting their nuclear arsenal through repeated nuclear tests. In fact, in the past, I have advised Western powers to mock them into eliminating their entire stockpile in this manner:


North Korea's preparing for a third nuclear test, supposedly. And I say let 'em! Then taunt them that we thought that was just a bunch of TNT detonated in a mine shaft, so they'll detonate another one to prove us wrong. Lather, rinse, repeat, and eventually all their nukes will be gone. I should be president.

That is, of course, why I keep getting passed over for Assistant Secretary of State of Northeast Asian Affairs.