I don't know any kyopo parents — especially if they're immigrants — who wouldn't be oh-so-proud if their daughter were parading around in her undies on national television. 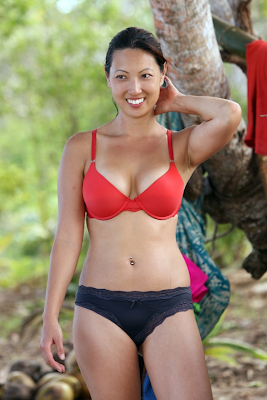 But only if she gets the million-dollar prize.

UPDATE:
Following GI Korea's lead, I probably should let her have a chance to get in a few words herself. Here's her Survivor interview:

She's a free-lance everything, as well as "not your quintessential Asian girl." Not sure if it's good that she's not following stereotypes or bad that she thinks loads of people are subscribing to them in general.

At any rate, I'll be tuning in to Survivor: One World (I always do) to see if I've been a bit harsh or not.

UPDATE 2:
I'm a terrible person. I shouldn't do this, but I just can't resist. See, I do much of my TV and movie viewing with "M," who is not a native English speaker, so we usually watch with the captions on. And every now and then you get a funny juxtaposition of picture and text, as below.

The truth is, I think I've been giving Christina Cha too hard a time, and not just by posting this screen cap of her in a compromising position. She actually has become the one player I'm rooting for this season (I don't usually watch until a day or so after the original broadcast so please, no spoiler alerts in the comments section).

This is in part because she has become an underdog. More specifically, there are a bunch of people there who have a horrible hate-on for her and I cannot figure out why. We the audience have seen absolutely no reason whatsoever for them to despise her with the passion they do, but they have been vicious.

What gives? She has has been friendly, she pulls her own weight around the camp, she hasn't backstabbed anyone, and she seems likable. So what gives with all that animosity?

Since it seemed to stem from that one Republican fellow who thinks he's a woman, I started to develop a theory. Colton is a gay person in Alabama and in the GOP who spews bigotry and intolerance toward others (e.g., "ghetto trash"). I mean, really? Irony much?

And since he seems to be the fountainhead of the river of vitriol reserved for Christina, I have to wonder if that, too, does not stem from, to put it bluntly, animosity toward Asians, or Koreans in particular. (Maybe he didn't get a job at the Kia factory.)

In the first few episodes, I really kinda felt sorry for Colton, whose early teammates seemed as homophobic as they were misogynistic. But then he just became this self-absorbed fireball of narcissism and evil, and I was kinda sorta standing up and applauding in front of MacBook when he was sent packing.

Yeah, yeah, I can attest that appendicitis is no fun at all and I wouldn't wish it on anyone, but it was very clear that karma bitch-slapped you, Bruddah.

And if I'm right that the Christina Cha hate-fest was racially motivated, what's up with Jonas Otsuji being part of that bevy of bigots? Seriously, dude. Maybe I should put up compromising pictures of you.

Nah, I won't. First off, it's the pics of Christina Cha that bring the thousands upon thousands of hits to Monster Island. And second, since Jonas and I both live in Hawaii, there's no small chance I might run into the guy (it's not hard to see celebrities here in Honolulu — "M" even had a class with Purple Kelly a couple semesters ago) and if so, I'd like to tell him I thought he did a great job on the show and shake his hand, without him lopping it off with one of the tools of his trade.

UPDATE 3:
It pays to watch Survivor's extra stuff. My hunch was apparently right about the hate-fest toward Christina having a racial component to it. Indeed, it seems appendicitis isn't the only thing with which Colton was afflicted: he also had a case of "chink eye."