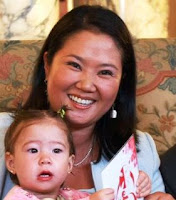 Keiko Fujimori, the thirty-five-year-old daughter of Peru's imprisoned former president, Alberto Fujimori, came in second in the first round of voting in that South American country.

Her opponent is a leftist who promises to redistribute wealth, so there's a good chance that those who voted against Ollanta Humala this time around will rally around Ms Fujimori on June 5. That is, in fact, how her father first one the presidency in the 1990s.

I find Peru's politics interesting for two reasons. First, it demonstrates the relative acceptance of the descendants of East Asian immigrants, particularly from Japan. Second, and more importantly to me, the run-off system employed there provides one viable alternative to South Korea's win-by-plurality system, in which a relatively unpopular candidate can still win if more popular (or less offensive) politicians from different parts of the spectrum fail to decide on a single candidate.